When I’m trying to lose a few pounds, I like to have something nice and filling for my lunch but without too many calories or too much fat.  Somehow, many of the sandwiches that are fit the healthy remit don’t seem to fill me up.  So I made this Bulgar Wheat Salad, the wheat fills you up and the vegetables add the taste.  You can vary the vegetables and the dressing add chickpeas or kidney beans to add a bit of interest.

Bulgar Wheat Salad
200g Bulgar Wheat
1 whole cucumber, deseeded
4 tomatoes, deseeded
2 sticks celery
half a red pepper, deseeded and chopped
half a yellow pepper, deseeded and chopped
1 teaspoon olive oil (I used some chilli infused oil which really added to the flavour)
juice of half a lemon
Put the wheat in a bowl and cover with boiling water, about half an inch over the wheat.  Leave for 30 minutes to absorb the water, the wheat will swell.  Add the oil and lemon juice while the wheat is still warm.  Leave to cool.
Chop the vegetables to small even pieces and mix through the wheat. 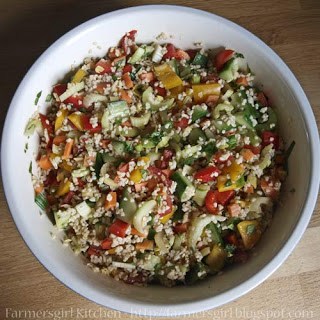