0shares
It’s time to check out who entered the February Dish of the Month, a blog event born of our love of Nigel Slater’s recipes and we haven’t been disappointed by the variety and deliciousness of this month’s entries.
First up was Jane at Onions and Paper with Nigel’s Bacon and Celeriac Soup from the Kitchen Diaries II.

I love Karen’s presentation of the White Bean and Tarragon Soup in a pretty tea cup!  Read more of Karen’s culinary adventures at Use it up, wear it out. 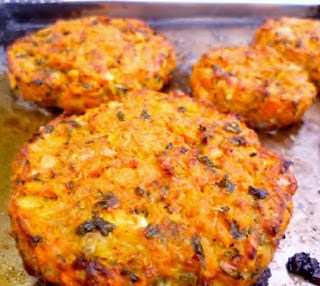 The incredible colour of these Carrot and Coriander Fritters is matched by the gorgeous flavour according to Rachel at Marmaduke Scarlet. Rachel’s fritters are not quite to the recipe in Nigel Slater’s Tender, however they look like they turned out pretty well and, as I recall, got some praise from Nigel on Twitter. 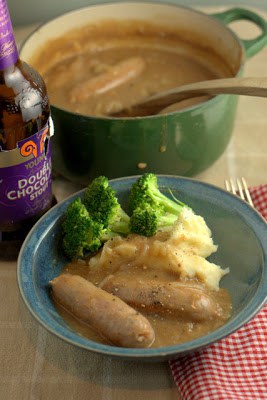 February brought out the comfort food recipes and Helen at Fuss Free Flavours found this comforting recipe for Slow Baked Sausages in the November chapter of Kitchen Diaries II and spiced it up with some mustard and chose a Double Chocolate stout for her dark beer. 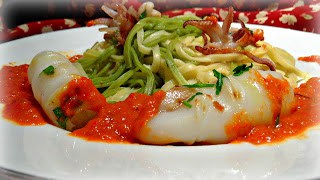 Galina at Chez Maximka has a real soft spot for Nigel Slater and chose this ambitious Squid Romesco.  Her heart was won over completely when the dish turned out so well AND she got compliments from Nigel on Twitter! 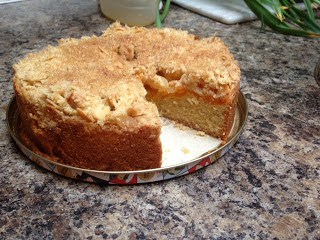 Mrs P baked this Apricot Crumble Cake which she described as buttery, almondy cakeyness, who could resist? 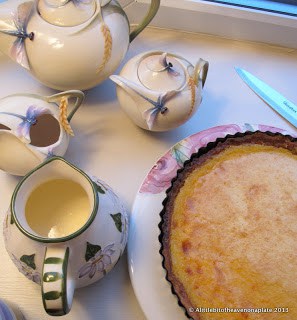 Sue from Heaven on a Plate,  my co-host and super Dish of the Month Pinterest pinner, tackled the biggest challenge in the February chapter of The Kitchen Diaries II, the lemon tart, and what a beautiful looking tart it is too. 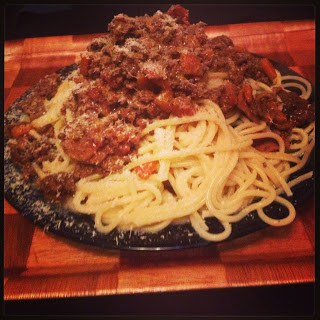 YummyMetz seems to have been inpsired by the horse/beef crisis to make a meaty Nigel Slater spaghetti bolognaise!  I’m sure she checked the provenence of her mince, it went down will with Mr A and I hope she managed to put at least one portion into the freezer for later. 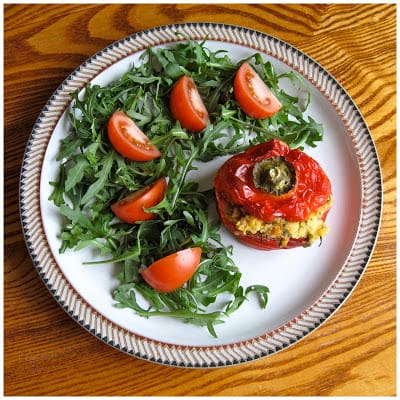 This ‘bright and cheerful’ recipe from Nigel Slater’s Observer column jumps off the page at Nyssapod blog.  Peppers with chickpeas and Gorgonzola is a simple dish but full of flavour and colour, great choice. 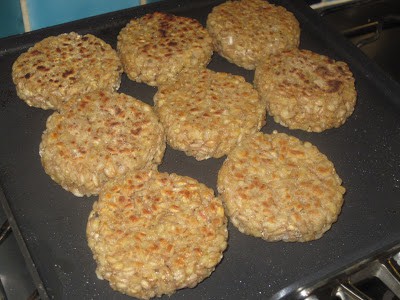 Nigel has been busy responding to the tweets of our Dish of the Month bloggers this month, when Claire at Foodie Quine tweeted her intention to make Sausage and Spelt Cobbler, this was the reply she received:
“@realnigelslater @foodiequine @serialcrafter A warming dish, cheap and filling. An edible duffel coat against the snow. (But much tastier.)” 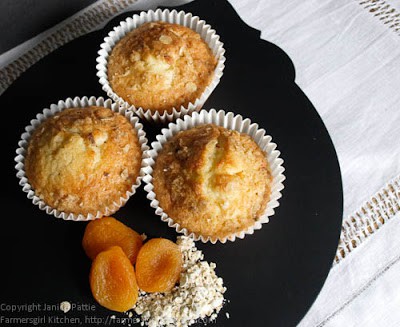 My own offering for February was these ‘little oat and apricot cakes’ made with similar ingredients to the Apricot Crumble Cake and very moist and tasty. 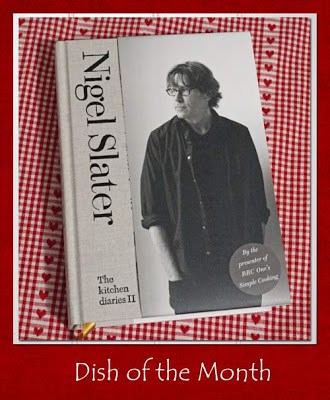 Well that’s it for February, thanks to all who joined us cooking the recipes of Nigel Slater.  I’ll be back with the linky for March on Sunday 3rd of March so if you have any of Nigel’s books, get them out and see what you can make, if you don’t then there are plenty of recipes on line or why not try one of the recipes that have been shared here or in the January Round Up ?
0shares

A lovely selection. I am eager to try some new ideas too. And thank you for organising the challenge, Janice, and the great round up!

Love it…so many great entries…shaping up to be a great year of cooking. x

It all looks so good!

so sorry I ran out of time to enter! I was away from home for 2 weeks and Feb is such a short month! Will join in this month! LOVELY round up!