It’s St Patrick’s Day on 17th March and I’m celebrating this Irish festival with a Galloway Irish Stew.  It’s an Irish stew by any other name, but one that has travelled across the Irish sea to the South-West of Scotland.

So why Galloway Irish?  My farm kitchen is in the south west of Scotland,  although not in the Rhins of Galloway, which is at the most southwestern corner.  Because Stranraer is the shortest sea route between Scotland and Ireland, many people travelled back and forth between Northern Ireland and the Wigtownshire area with high numbers crossing to escape the Irish potato famine.  My husband’s family have origins in Ireland and although I’m not originally from this area, I actually have ancestors with the name of ‘Ireland’.

Over a period of time, the dialect spoken in the Wigtownshire area took on a distinct Irish influence and became known as  Galloway Irish. You can hear the accent on this BBC recording

Irish Stew appears under different guises in many places in the UK.  Lob Scouse in Liverpool, Welsh Cawl and Lancashire Hot Pot are all versions of a simple one-pot lamb and vegetable stew.  So why not  Galloway Irish Stew?   Okay, I made that up, but lamb stew is as much a part of Scottish cuisine as it is anywhere else where sheep graze the hills and root vegetables are the staple fare.   This stew contains lamb, potatoes and carrots, familiar ingredients for an Irish Stew, the difference is the addition of parsnips and the cut of lamb.  I used a lovely leg of lamb rather than the cheaper, middle neck or scrag-end.

Galloway Irish Stew
1.1kg leg of lamb
2 onions, cut into chunks
3 carrots, peeled and cut into chunks
4 parsnips, peeled and cut into chunks
3 sticks of celery, sliced
1 tbsp tomato puree
500 ml lamb stock
salt & pepper
As many peeled potatoes, cut in large chunks, as you can fit in the pot!
Heat the oil in a flameproof casserole, brown the meat, then remove to a plate. Turn the heat down and add the onions, carrots, parsnips and celery and saute for about 10 minutes.
Put the lamb back in on top of the vegetables and pile in the potato chunks around about it.  Add the tomato puree to the vegetable stock and pour over the meat and vegetables, season with salt and freshly ground black pepper.
Cover the pan and cook at 160C for 2 hours until the meat falls away from the bone.
More Irish goodies coming soon.
2shares 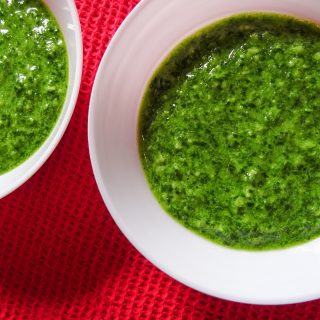