On Friday, I posted a message on Twitter:  I asked what I should do with the leftover Piri Piri Chicken.  I had replies from  The Glasgow Food Blog, Carl Legge and Edible Things suggesting wraps and risotto, but none of these was really speaking to me.

Anyway, I went back to the fridge and had a rummage and found this: 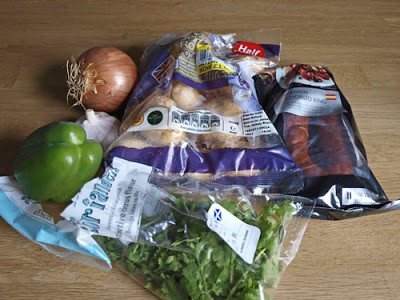 An onion, a green pepper, a chorizo sausage (hurrah) some reduced price jersey royals and half a bag of coriander.  I was immediately reminded of  Dom’s latest chicken thigh recipe, Chicken Thigh Creole Gumbo at Belleau Kitchen.  So this is a sort of homage to the Chicken Gumbo, but with more of a leaning towards Spain than to the Southern States of the US!  Many thanks to all who suggested ideas for my left overs, it’s nice to know that people will respond to a request.

Patatas Bravas with Chicken and Chorizo

Roast the potatoes: half and quarter the potatoes so they are all a similar size. Cook for 5 minutes in boiling water then drain.  Heat the oil in a roasting tin at 200C, add the potatoes and roast for about 30 minutes until golden and crispy.


Make the sauce: Put 1 tablespoon of oil in a pan and saute the onion until it starts of soften but not colour,  add the sliced green pepper, the chorizo and the smoked paprika, cook for 5 minutes.  Add the two tins of tomatoes, the stock cube and seasoning and cook for about 10 mintues.  Shred the left over chicken and add to the sauce,

Serve the sauce over the roasted potatoes and sprinkle over the chopped coriander ( I forgot to add it for the photo!)  I have to say that this dish was probably better than the original Piri Piri Chicken and lovely and warming on a cold and damp June day!

I’m entering this for the No Waste Food Challenge at Turquoise Lemons blog.