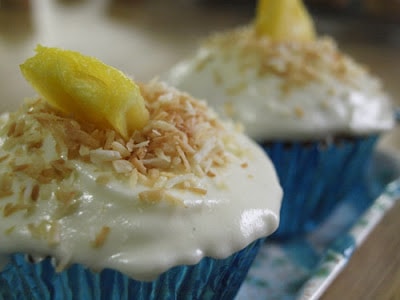 I love a nice sweet pineapple, even though they are available all year round in the supermarkets, they still seem rather exotic.  I’ve never had any difficulty in peeling and cutting a pineapple but was  intrigued when I was sent an OXO Good Grips Pineapple Slicer to review. 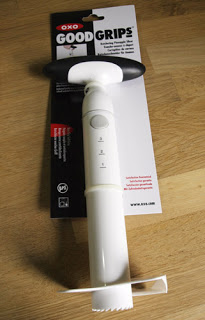 I decided that the best way to show you how it works would be to make a video and post it on here.  When I uploaded it to You Tube, I came across a professional ‘how to’ video created by OXO Good Grips.  I’ve decided to post both of them, so that you can see me reading the instructions and cutting a pineapple for the first time/  This was going to have to be ‘one take’ because I only had one pineapple, so I was concentrating on reading the instructions and cutting the pineapple and didn’t realise, until my husband started laughing, that some of it could be interpreted as a bit rude!   Anyway here is my version:

And here is how you should really cut your pineapple…

I’m hoping I will get better with practise, now that I understand how the slicer works!

Here is the slightly mangled pineapple, oh boy was there lot of juice.

At the same time, I was asked to try this 12 cup deep Glidex Muffin Tray from Great British Bakeware by George Wilkinson The tins are ceramic reinforced and triple coated with superior non-stick, dishwasher safe and they even state that they are safe for metal tools.  I liked the weightiness of the tin and the cups are a good size and, very importantly,  they are British made, in Lancashire.

The best way to test the tin was to make some muffins or cupcakes and I thought I’d bake some cupcakes that included pineapple, so what better than a combination of pineapple, rum and coconut. The Glidex Bakeware performed extremely well, I will try it without paper cases next time, perhaps with some savoury muffins to test out the non-stick coating.

1. Pre-heat the oven to 180C/Gas Mark 4.  Line a 12 cup muffin tin with cupcake cases.
2. In a bowl, combine the flours and set aside
3. In a large bowl beat the butter until creamy and smooth. Add the sugar gradually, beating after each addition.
4. Add the flour in three stages, alternating with the milk and rum.  Beat until the ingredients are combined and well blended.
5. Spoon the mixture into the cupcake cases, filling about 2/3 full. Bake in the pre-heated oven for about 15-20 minutes.
6. Cool in the tin for about 15 minutes. Remove from the tin to a cooling tray and cool completely before icing.

1. Put the chocolate pieces in a heatproof bowl that fits over a pan of very gently simmering water, allow to cool to room temperature.
2. Beat together the cream cheese and butter until smooth.  Mix in the white chocolate and rum or rum extract.
3. Gradually beat in the icing sugar until the mixture is fluffy.
4. Spread the mixture over the cupcakes with a palette knife.

To decorate
1. Toast about 50g (2oz) of dessicated coconut in a dry pan over a medium heat, stirring frequently and watching carefully so it doesn’t burn.  Leave to cool.
2. Sprinkle the coconut over the cream cheese frosting and place small wedges of pineapple on top.

At first I was a little disappointed in these cupcakes, the cake seemed a bit cloying and stuck to the roof of your mouth.  However, if you can be patient,  they keep incredibly well, in an airtight plastic box in the fridge and improved quite dramatically after a couple of days.

We should Cocoa is 2 years old and celebrating with Cocktail inspired chocolate creations. The challenge is run by Choclette at The Chocolate Log Blog and Chele at Chocolate Teapot. I’m entering the Pina Colada Cupcakes with their little bit of white chocolate in the frosting.

And just to round things off, the letter for Alpha Bakes, hosted this month by Caroline Makes, alternately with The More Than Occasional Baker this month is ‘P’ which gives me a hat trick of cakey challenges.