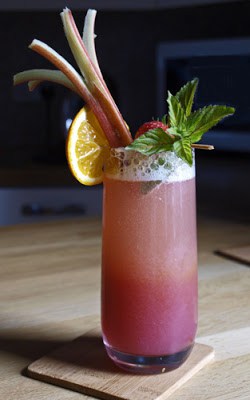 Urvashi Roe, The Botanical Baker, set a challenge for us foodie bloggers to come up with a Summer Cocktail.  I was inspired in my cocktail making by two particular blogs:  Chocolate Log Blog  where Choclette made a Rhubararella with homemade rhubarb shnapps and The Paupered Chef’s Homemade Rhubarb Syrup and ‘Rhubarb Daisy’ 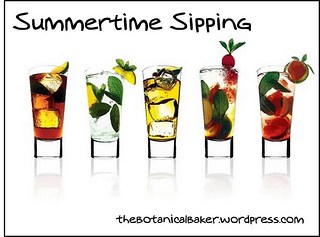 I thought about making the schnapps, but somehow it was the Homemade Rhubarb Syrup that appealed to me.  The recipe is just sooooo easy: two cups sugar, two cups water, 6 or 7 stalks of rhubarb, washed trimmed and finely sliced.  Check out the method, also extremely easy, at The Paupered Chef.   I sterilised a jar and have been storing the glorious pink stuff in the fridge waiting for the weekend to come around again. 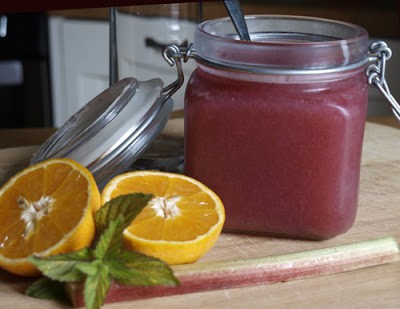 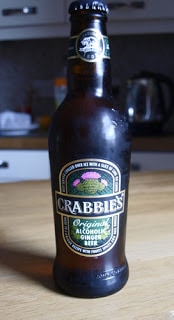 1. Cut the orange in half, squeeze one half and put the juice in the bottom of a tall glass. Cut a slice from the other half of the orange and make a cut into it so it will sit on the glass.
2. Take the stalk of rhubarb, split the top downwards with a knife several times until it starts to splay out, put it cut side down into a glass of iced water (this will help it to bend)
3. Pour 250ml Rhubarb Syrup into the glass
4. Top up with Crabbies AGB or, for a non-alcoholic cocktail, ordinary ginger beer.
5. Remove the rhubarb stick from the water, dry with kitchen paper and place with the ‘flower’ upwards into the glass.
6.Thread the strawberry and mint onto the cocktail stick or skewer (I used a bbq skewer and cut it to size) and lay across the top of the glass
7. Add the slice of orange and enjoy.

The rhubarb can be used to mix the ingredients before drinking, but it’s fun to leave the layers of different ingredients showing when you serve. 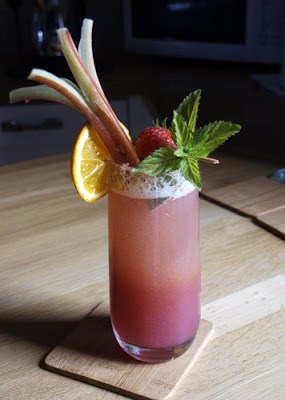 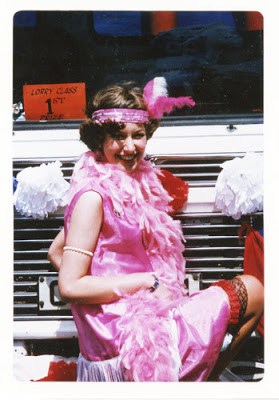 Cocktails always make me think of the 1920s, so I thought I would share this photo I found when I was visiting my mum recently.  I would be about 19 and was part of a ‘float’ for the local festival parade.  My mother was always roping me into these things and the costume was really fun to wear.  CHEERS!