It’s time for another Forever Nigella challenge over at maisoncupcake.com.

Now Nigella has many delicious chocolate creations in her cook books, but I didn’t want to make a big cake or a pile of cookies because you know what would have happened…yes, I would have eaten them all.  So I thought I’d see if I could find something that could be made on a fairly small scale, maybe a dessert that could be shared but not sitting there tempting me all week! 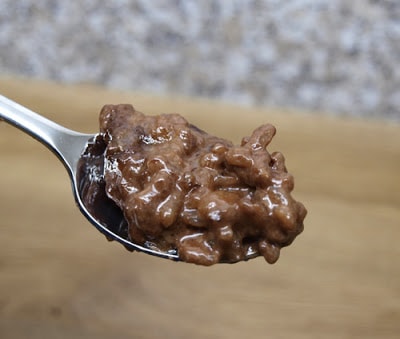 So here it is, Chocolate Rice Pudding
This recipe is in Nigella’s Feast book but as I made some alterations by using double cream (it needed used up) and the white chocolate which was also left over from another recipe, so I can post the amended recipe.
Chocolate Rice Pudding (serves 2)
butter for greasing the pudding dishes
1 tablespoon of cocoa
1 tablespoon plus 1 teaspoon boiling water
100ml double cream
150ml milk
2 tablespoons pudding rice
50g good quality white chocolate, roughly chopped
1 tablespoon caster sugar
Preheat the oven to gas mark 2/150c.  Put the baking sheet in the oven to warm as it heats.  Grease two 150ml pudding bowls or ramekins.
Put the cocoa into a small measuring jug and dissolve with the boiling water then pour in the milk, stirring.  Divide between the buttered dishes.  Add 1 tablespoon of rice and divide the tablespoon of sugar between the dishes, stir.  Add the chopped chocolate and put them on the baking tray in the oven for 30-40 minutes.  Let stand for a while before serving.
It doesn’t look particularly pretty when it comes out of the oven but it is really delicious, and not oversweet even with the white choc included.
Do you want to see?  Really?  It might put you off!

Okay you asked for it…not a pretty sight, lol!
0 shares