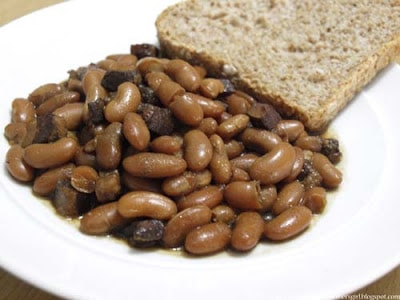 This is the Haricot Beans baked Boston style served with a slice of Wartime Loaf. We had this for our supper last night, I know it looks a bit dull, but it was actually really very tasty.
Here is the original recipe:Haricot Beans baked Boston Style
Soak a quart of small haricot beans overnight in cold water, then in the morning drain them, cover them with fresh cold water, let them heat through gradually, and cook until the skins will burst, which point of cooking can be easily be ascertained by taking out one of two beans and blowing on the, when their skins will crack if they are done enough. Be careful not to let the water actually boil during the cooking. Then drain the beans , keeping the water for soup. Blanch a piece of fat salt bacon weighing about three-quarters of a pound, and cut off a slice about a quarter of an inch think. Put his slice in the bottom of the pot in which you will cook the beans, put the beans on top and embed in them the remaining piece of bacon, scoring the rind an inch deep every half-inch across, and leaving this rind exposed above the beans. Now mix together there level teaspoons of salt, two level tablespoonfuls of sugar and anything from a tablespoonful to a tea-cupful of treacle, according to the sweetness of your tooth, and moisten this mixture with has a breakfastcupful of boiling water. Pour this mixture over the beans and if there is not enough water to cover them, add more billing water until there is. Cover the pot now, and bake in a slow oven from six to eight hours, taking off the lid for the last hour to brown and crisp the bacon rind. If the beans who sign of drying during the cooing, add more boiling water, and if you like lean bacon as well as fat, decrease the amount of salt. If liked a level teaspoonful of mustard can be added to the liquid when it is poured over the beans. In the New York style, the treacle is omitted, and the beans are cooked in a shallow instead of a deep pan.Here is my version which doesn’t take six to eight hours!

1. Soak the beans overnight in cold water, drain, cover with fresh water and simmer for about an hour until they have started to soften.
2. Heat an ovenproof casserole to a medium heat and add the bacon pieces, cooking until browned
3. Turn down the heat and add the onion, cook gently until softened.
4. Add the beans, treacle and enough boiling water to cover.
5. Cook at 150C for 1 1/2 to 2 hours, checking occasionally to make sure there is still some liquid left, top up if necessary.
6. Season before serving 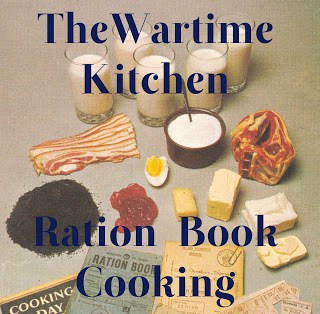 I’ll be back with more Ration Book Cooking tomorrow.
0 shares