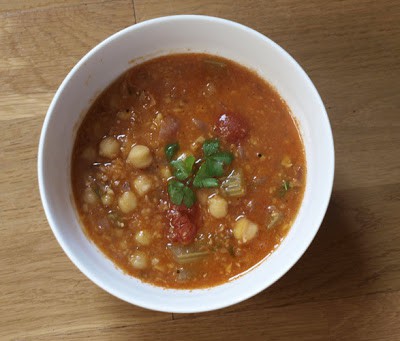 At this time of year I always have a pot of soup on at the weekend, so I was delighted when Lyndsay at Vanilla and Lemon Drops announced that ‘Soup’ was the theme for her November Sweet Heat challenge. 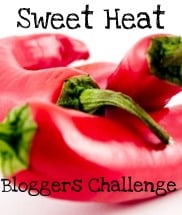 I had a few cookbooks lying around in the living room and one of them was ‘Supper for a Song’ by Tamasin Day Lewis.  It was from this book that I was inspired to  make the Tomato and Chilli Jam, Pineapple Chilli Jam and also the Chocolate Chilli Custards.  Hmm bit of a theme here?  Not all of that is Tamasin’s idea as she didn’t have chilli in her Chocolate Custard!

I liked the look of this soup because I knew I had half a bag of chickpeas and also two tins of Pimenton (smoked paprika), the sweet one and the hot one, that my foodie son bought me last Christmas.   You can use tinned chickpeas if you don’t have time to soak and cook the chickpeas before you make the soup.

print recipe
Chickpea and smoked paprika soup
by Tamasin Day Lewis November-8-2011
If you don’t have both types of smoked paprika, just use one, but probably no more than 1/4 tsp of the hot stuff or it will overpower the soup.
Ingredients
Instructions
1. Heat the oil in a large, heavy-bottomed pan and add the onion, garlic, celery and rosemary.2. Fry for a few minutes until they begin to soften, then add the chickpeas, smoked paprika, bay leaves, tomato puree and tinned tomatoes.3. Bring to a simmer, then add the stock, season and bring back to the boil.  4. Lower the heat and heat and simmer for 10 minutes.5. Discard the bay leaves.  Blitz about half the mixture in a blender, then re-introduce it to the chunky soup in the pan.6. Tsate and adjust the seaoning, stir in the parsley and reheat if you need to.  Ladle into warm bowls and serve.
Details