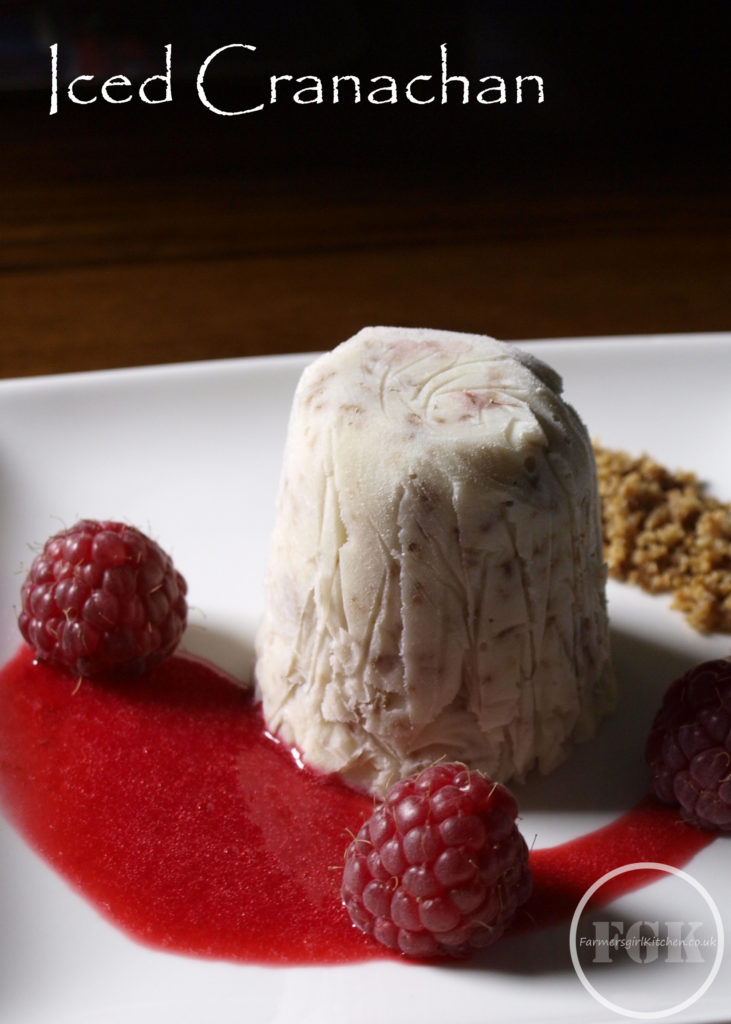 Iced Cranachan for Best of British – The Scottish Challenge!

When you think about Scottish cooking what comes to mind?  Haggis? Salmon? Oatcakes? Cullen Skink?  There are plenty of modern and traditional  recipes to choose from in the Scottish Kitchen so why don’t you rise to the challenge and cook or bake something Scottish, put it on your blog and you could be in with a chance to win.

We are lucky that New World Appliances as proud BRITISH manufacturers
of kitchen appliances are sponsoring this event for the first six
months.  Each month, one entrant will be picked AT RANDOM to receive a
£50 Amazon voucher.  And, at the end of the six month period we will
have a regional showdown, with a judge to pick the best entry (we are
still working on who that will be and should be able to announce it
shortly).  New World Appliances have kindly offered £300 of Amazon
vouchers for the overall winner, so if you enter every month you have 6
chances to win the grand prize!
We’ll be showcasing the entries both on the Face of New World blog
and on host blogs and promoting the recipes through Facebook and
Twitter, with all your entries fully credited back to your blogs.
So, why not show what you think is the Best of British and join our challenge.
Rules:
The full rules are posted on The Face of New World Appliances. However, here is a summary of what you have to do to enter:

The Best of British Challenge has been organised by Karen Burns Booth of Lavender and Lovage and Fiona McLean of London Unattached.  Many thanks to them both for all their hard work and to Choclette at Chocolate Log Blog for hosting the first month featuring recipes from Cornwall. Remember to check the round up on the 20th June.

There are so many fantastic food producers in Scotland.  We have high quality beef and lamb and game, incredible seafood and delicious dairy produce.  The varied landscape of Scotland has the right conditions to for all of these products and, despite some of the ‘deep fried Mars Bar’ anti-food propaganda, Scotland has an excellent reputation for good food.

I thought long and hard about what I should showcase for Best of British and toyed with a smoked venison salad or maybe some traditional baking.  In the end I decided to put a bit of a twist on a dish that is full of Scottish products and is popular in restaurants and at home for entertaining:  Cranachan.

I’m not sure what that bottle says about us, there doesn’t seem to be much Auchentoshan malt whisky left!  In my defence, we have had that bottle for quite a while… oh yes and some lovely Scottish Heather Honey, thick and fragrant.

It’s also the start of the Scottish soft fruit season.  I visited a fruit farm in Fife last weekend, no raspberries there, but plenty of strawberries.  These raspberries come from Perthshire, the cooler summers in Scotland are ideal for raspberry growing.

For the Oat Crumble

To make the ice cream

To make the oat crumble

For the Raspberry Coulis

I used some old fashioned Tala Castle Cake tins, lined with clingfilm, to make my little ices, but you could use a small glass or just add a scoop of ice cream to your plate.  You need to take the ice-cream out of the freezer about half an hour before eating.  Place the ice cream on the plate, using a dessert spoon add a pool of raspberry coulis on one side and place three raspberries in the coulis.  Add a little ‘stream’ of oat crumble on the opposite side of the plate.

This is not an over sweet dessert, there is only a very subtle taste of whisky, but you could leave it out if you don’t have it or don’t like it.  They honey taste is to the fore and the different textures of the crunchy oat crumble and smooth raspberry coulis are delicious with the ice-cream.

I hope you will join us in the Best of British Challenge and make something from Scotland, it can be a traditional Scottish dish or a dish using Scottish produce.  I look forward to seeing what you make and good luck with the prize draw.