In the Kitchen Diaries II, Nigel Slater tells us ” I am not a chef and never have been. I am a home cook who writes about food.”  He goes on to say “I’m neither slapdash or particularly pedantic in the kitchen (I haven’t much time for uptight foodies; they seem to have so little fun).  Neither am I someone who tries to dictate how something should be done and I am never happier than when a reader simply uses my recipe as an inspiration for their own.”

If you have taken part in ‘Dish of the Month‘ or even read through one of the roundups, you will realise that most of the participants use the recipes as an inspiration.  I am trying to cook the Kitchen Diaries month by month, finding at least one recipe from the appropriate month to share in this blog challenge and I have found that the inspiration route certainly works for me.  Some of this may be because the seasons in Scotland are slightly out of kilter with the more southern parts of the UK, for example, Elderberries feature in the August chapter and at the end of August they are still green here.  Or it may be that I am more of an ingredient led cook e.g. what is in the fridge/freezer/cupboard/garden

No matter, I’ve never failed to be inspired by Nigel’s recipes and ideas, even if, sometimes, I veer so far off recipe for them to become unrecognisable!

And so to this month’s offering which is Lamb ‘osso buco’ with parsley papardelle.  Guess what?  I didn’t have lamb steaks on the bone, I had a nice piece of Herdwick rolled shoulder, so I made this into more of a pot roast, oh and no Marsala either, so I used a tablespoon of Brandy and some lamb stock.  And, because I haven’t been feeling too well recently and couldn’t face making roasties, I just threw the potatoes in to cook with it.  So no need for pappardelle, although I may make that to eat with the leftover lamb.  I also made some fresh mint sauce which added to the deliciousness. 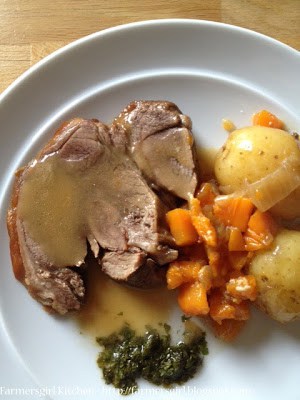 Dessert could have been Pear and Chocolate Oat Crumble from KDII, but I didn’t have any pears, so I concocted a Peach, BlackberryAlmond Crumble instead.  As this is my recipe rather than Nigel’s, I have included it for you below. 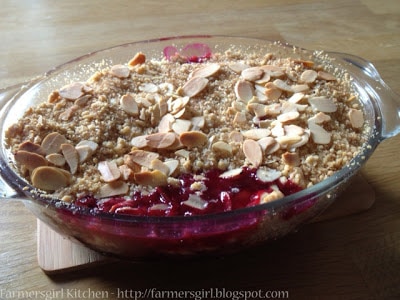 1.  Skin the peaches, by putting them in a bowl, pouring over boiling water and leaving for a couple of minutes, then removing and the skin should come off easily.
2. Slice the peaches and place in an ovenproof dish.  Add the brambles,  and the sugar.
3. Put the flour, ground almonds and butter, cut into cubes, into a bowl.  Rub the butter through the flour and almond mixture until it resembles breadcrumbs.
4. Add the demerara sugar and spoon over the fruit in the ovenproof dish.
5. Sprinkle the flaked almonds over the crumble mixture.
6. Bake at 160C for about 40 minutes until the fruit is bubbling and the crumble has turned golden brown.
7. Serve with cream, ice cream, yogurt or custard.

If you would like to take part in Dish of the Month, then please: