Marika’s Scrambled Eggs comes from one of my favourite cook books, The Best of Marika  Hansbery Tenison. 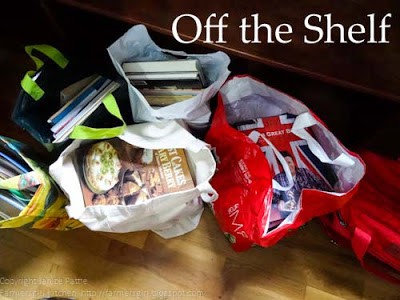 I have a lot of cookbooks. I have been collecting them since the 1970s and although I do cull them now and then, each one has a place on my book shelves for a particular reason. I recently had to clear all the books from my custom made shelving unit under the kitchen window. As I piled them into bags, it occurred to me that many if these well loved friends had been neglected in favour of shiny new celebrity cookbooks and review copies I’m always delighted to receive from publishers.

Sitting here in my kitchen on a Sunday afternoon seemed the right time to revisit some of these books, many of which will be out of print now, and share them with you. I did consider creating a blog challenge, but there are so many now and I don’t need the pressure or the extra work. Instead I will dip into my collection whenever it suits me and share my thoughts and memories of the book in question. 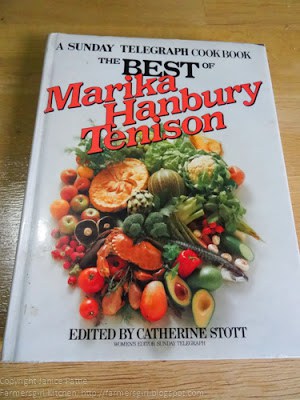 The book was published in 1984 and, as was more common then, there is not a colour photograph for every recipe. However those which do feature are excellent and well. If simply styled. There are also many attractive line drawings by Soun Vannithone scattered throughout the book. I didn’t intend to run through every chapter as I do in my other reviews but somehow that’s just what I ended up doing.  I’ve highlighted some of the recipes I have made, easy to see as I used to fastidiously mark each recipe from 1 to 5 stars!

Marika’s Scramble only seems to have 3 stars although as I re-read the recipe I thought it sounded delicious, so decided to have another go at making it.  It was really quick to make and definitely worth more than 3*.  It’s basically scrambled egg with added flaked, smoked mackerel and chopped tomatoes, in the recipe the base is fried bread but I toasted thick slices of Pain de Campagne, then rubbed the top with a cut clove of garlic, piled on the scramble and topped with two rashers of streaky bacon and sprinkling of parsley.

The title of this recipe reminds me of one of the things I love about this book: the titles of some of the recipes. How could you resist Gelda’s Fancy, Crumpelettes or Matrimonial Eggs? And that’s only in the chapter on Lunch and Supper dishes.
It’s interesting to see that the Fish dishes which seemed so alien to me then, are now standard fare. Fish like Sea Bass, Red Mullet and Monkfish simply weren’t easily available and far too expensive for me in 80s Glasgow. I have, however given 4 stars to Baked Stuffed Herrings in Foil, another surprise as I rarely eat herrings due to the whiskery bones ( I know, I’m a wimp) the recipe includes mushrooms lemon juice, cayenne pepper and tomato purée.

In the Meat Chapter I have given Maidenwell Goulash 4 stars. Maidenwell was the home of Marika and her husband, the explorer Robin Hanbury-Tenison, a house high on Bodmin Moor. The Goulash page is pleasingly spotted, always a sign of a good recipe! I’ve written at the bottom of the page that it is ‘a good meat stretcher’.  In addition to the chuck steak, the goulash contains potatoes, carrot, parsnip and celery. I’ve also noted that I made it without red wine or stock cubes, but used 1 pint of miso stock.

I seem to have made quite a lot of the meat dishes, particularly Pork recipes: Pork Adobo 4*; Pork Goulash 4*; Pork Chops with Leeks and Cider 5* and Leftover Meat and Cabbage Casserole 4*

Only one Poultry and Game recipe has been marked, Rabbit and Bacon Casserole 4*. Sozzled Chicken sounds good as does Paprika Cranberry Venison’s Turkey Pot Pies which contain no paprika, no venison and no cranberries, instead this refers to the nickname given to her by Private Eye magazine, she loved this cheeky tribute and promptly named this dsh after.

In Vegetables and Salads, Cauliflower with Watercress is a 5* recipe although my handwritten note says I used magnetout and courgettes in my sauce rather than watercress! No change there in my cooking style. Somerset Carrots, carrots cooked with Juniper berries and cider vinegar only merits 3*. Three stars was the cut off point for making something again, so this is still a good score.

In the Dessert chapter I had made Apple and Blackberry Crisp 4* is basically a crumble with flaked almonds in the crumble mix to add the crunch. I noted that the apples needed cooking longer than the recipe suggests. Strawberry Cream Gateau is an easy but impressive recipe using bought puff pastry, a 4* recipe. There are some lovely jellies and water ice recipes in the dessert section.

I don’t seem to have made or marked any of the Sauces and Preserves although there are some excellent chutneys, pickles and even some Damson Cheese.

At the end of the book there is a chapter of articles written by Marika entitled ‘First Catch Your Crocodile and other articles’, very entertaining and a real insight into the author’s lively personality.

The Best of Marika Hanbury Tenison (A Sunday Telegraph Cookbook) is now out of print, but copies can be purchased second hand via a popular online bookstore.