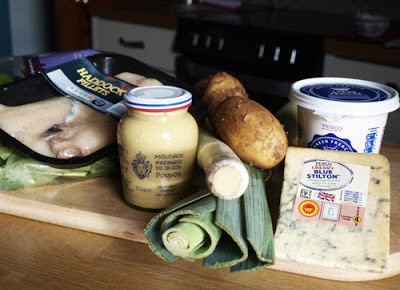 I opted to make a fish dish and only specified some spinach, the rest of the ingredients were a surprise to me a bit like doing ‘Ready Steady Cook’!

After much thought and some inspiration hunting through my cookbooks, I decided to make a layered bake. 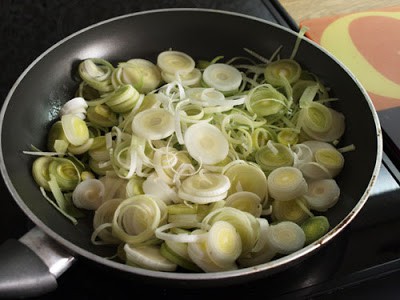 Put 1 tbsp olive oil and 15g butter in a large pan, add the leeks when the butter begins to sizzle.  Saute the leeks gently until they are soft and slightly golden.  Tranfer them to an ovenproof baking dish, season with salt and pepper.

Put the other 1tbsp of olive oil and 15g butter into the pan and add the whole bag of spinach leaves once the butter begins to sizzle.  Cover the pan (I used a sheet of foil and cook gently until the spinach has wilted, about 5 minutes.

Place the wilted spinach over the leeks in the ovenproof dish, season with salt and pepper.

If the fish has skin, remove the skin and cut the fish fillets into chunks and spread over the spinach and leeks.  Season with salt and pepper.

Put a tsp of cornflour into a bowl and add about a tbsp cold milk, mix together.  The cornflour will help the creme fraiche not to split when the dish is baked.

and now for the mustard, add a generous teaspoonful of Grey Poupon Dijon Mustard to the milk and cornflour and mix thoroughly.

Add the Creme Fraiche and the two chesses and mix together.

Spread the mixture over the fish and vegetables layers.

Peel the potatoes and slice thinly, parboil in a pan of boiling water for about 5-10 minutes until soft but not breaking up.  Top the ovenproof dish with the potatoes.  Melt around 20g of butter in a pan and brush the potato slices with the melted butter.

Bake in the oven at 180C for 30 minutes until the sauce is hot and bubbling and the potatoes are golden brown.

I was really pleased with the taste of this dish, you could taste all the ingredients but no one overpowered the others and the crispy texture of the potatoes was a nice contrast to the creamy sauce and soft vegetables.

Now the eagle-eyed among you may  have noticed that I did not use the Stilton.  I felt that it would have overpowered the taste of fish and I wanted the mustard to be the dominant flavour.  However, I thought it might be nice to accompany the Fish Bake with a salad and a little Blue Cheese Dressing.
Blue Cheese Dressing
100g Blue Stilton
2oz cream cheese
1 tbsp mayonnaise
100ml single cream
Crumble the blue cheese, set aside about 1/3 of the cheese and mix the rest with the cream cheese until well blended.
Stir in the mayonnaise and the single cream, then stir in the remaining blue cheese.
Cover with cling film and chill in the fridge for 3 hours to blend the flavours

I made a simple Waldorf salad with Romaine lettuce, chopped celery, sliced apple and chopped walnuts, combined with the Blue Cheese dressing this was very good and a complete contrast to the fish bake.
I’m not convinced these are ideal parnters but the Blue Cheese dressing would make an outstanding dip to have with crudites as it really complimented the celery (especially when I was testing it out before serving!)
1shares