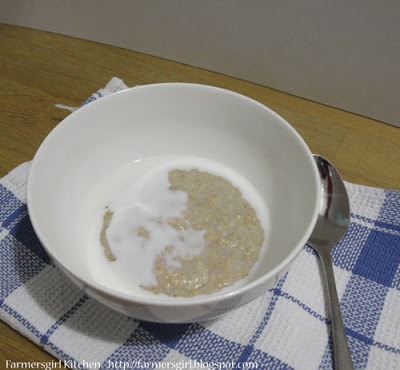 You may have noticed that I’ve been eating porridge for breakfast on most days of my Ration Book Cooking challenge.  This would be a real challenge for me if it wasn’t that I’d been sent some Flahavan’s Irish Course Cut Oatmeal.  It is probably closer to the porridge that was eaten during the war, the kind that had to be soaked overnight and then cooked for some time to soften it. That isn’t the case with this as the Irish Coarse Cut Oatmeal is made by kilning and steam cooking the
oats and cutting them into smaller pieces, resulting in a textured
porridge, that can be cooked in 3 minutes in the microwave or a little longer in a pan on the hob. 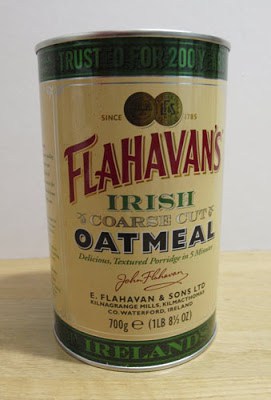 I am really not a huge fan of porridge made with rolled oats, it is too slimy for my taste, but porridge made with this coarse (steel) cut oatmeal, has real texture and a good taste as well as being good for you.  My father always had his porridge made with salt and this oatmeal is great served this way, a great savoury breakfast.  It also works well with sweet flavours, but you’ll have to wait till after the Ration week to find out about that!

Breakfast
Porridge made with Flahavan’s Irish Coarse Cut Oatmeal
Lunch
Sandwich made two slices of Wartime Loaf and 75g cheese and a tsp of homemade chutney
Dinner
Parsnips with Cheese (from Vegetables for Victory) as I haven’t made this yet, you will have to wait until tomorrow to see how it turns out.