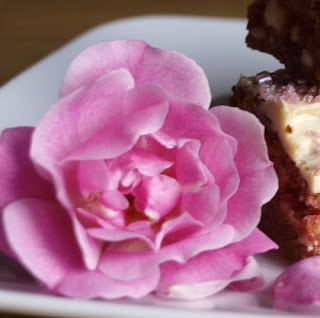 The ‘We should Cocoa’ challenge for the last couple of months has been nice and easy,  chocolate and strawberries – tick, chocolate and apricots – tick (I even managed to make that one low fat! 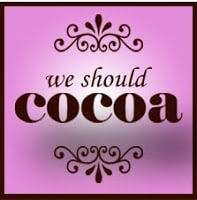 But when I read the August challenge I was horrified,  Chocolate and ROSE, what on earth was I going to make with rose, where (in the depths of south west Scotland) was I going to get rose water or rose flavouring of some kind?

I’ve been pondering the challenge for a few weeks now and considered all sorts,  I managed to find a bottle of Thorncroft Rose Hip Cordial at a deli in Kirkcudbright.

As I am on holiday at home this week,  I started to look seriously at some of my cake recipes to see if I could incorporate the rose flavour into one of them.
What I came up with was a recipe for Peanut Butter & White Chocolate Blondies from Rachel Allen’s Bake.  It called for a teaspoon of vanilla essence which I replaced with a teaspoon of the Rosehip Cordial.  I also added half a teaspoon of red food colouring to ‘rose’ it up a bit!

I melted the rest of the white chocolate and topped the ‘Barbies’ with the melted choc then sprinkled it with pink sugar, now totally Barbie.  I even had time for a bit of photo dressing with some rose petals and a little rose – awww pretty!  OMG they are delicious,  I’m not saying you can taste much in the way of rose in there, and this is certainly NOT the low fat option – but then, it is my birthday this week, I think I’m allowed.
Peanut Butter and White Chocolate ‘Barbies’
125g (4.5oz) plain flour
1 tsp baking powder
100g (3.5oz) butter, softened
150g (5oz) crunchy peanut butter
175g (6oz) soft light brown sugar
1 egg, beaten
1tsp rosehip cordial
1/2 tsp red food colouring
75g (3oz) white, chocolate, chopped
20 x 20cm (8×8″) square cake tin
1. Preheat the oven to 170C (325F) Gas Mark 3.  Butter the sides of the cake tin and line the base with baking parchment.
2. Sift the flour and baking powder into a small bowl and set aside.
3. In a large bowl, creamthe butter and peanut butter together until very soft.  Add the sugar, egg and rosehip cordial and beat until combined.  Add the flour, baking powder and the chopped chocolate to form a dough.
4. Place the dough in prepared tin and bake in the oven for 25-30 minutes or until golden brown an almost firm in the centre.
5. Allow to cool in the tin, before removing and cutting into squares.
Optional
Melt 75g (3oz) white chocolate with a knob of butter in a bowl over a pan of hot water, spread over cooled cake and sprinkle with pink Barbie sugar before the chocolate sets.  Cut into small squares.
0 shares