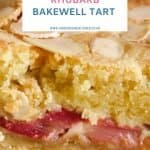 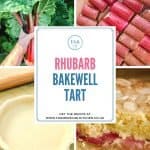 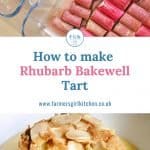 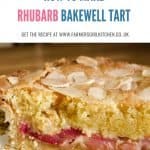 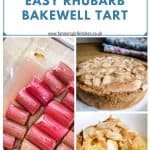 This simple Rhubarb Bakewell Tart recipe is a variation on a classic and delicious British dessert. The tart has a sweet almond shortcrust pastry shell filled with a rhubarb compote and topped with a frangipane almond sponge. 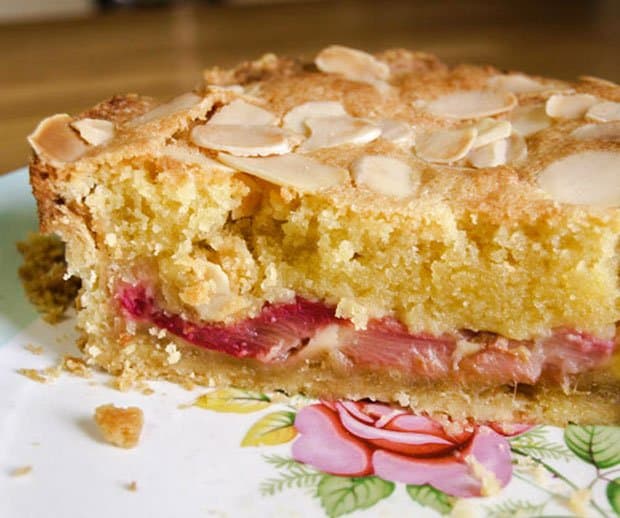 Bakewell Tart is properly known as Bakewell Pudding and was first made in the beautiful old market town of Bakewell in Derbyshire in 1860  and uses raspberry jam as the fruit layer.

According to local legend, the cook at an inn in Bakewell accidentally put the egg mixture over the jam instead of mixing it into the pastry, and created the Bakewell Pudding. The two names for this dessert are now used interchangeably, although the people of Bakewell stick firmly to their pudding. 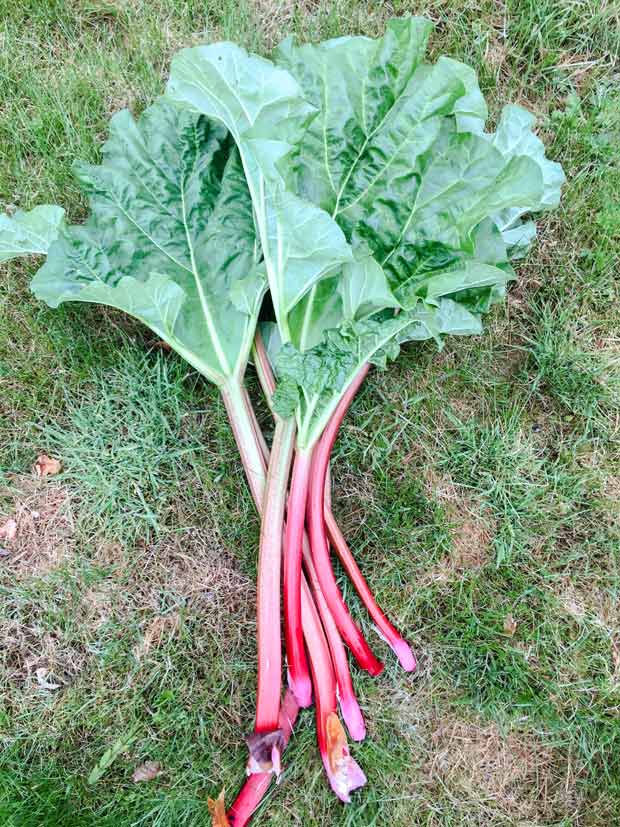 It has a tart flavour and is too sharp to eat raw, so combine it with sugar and other ingredients and it will bring a delicious tangy taste to your recipe.

Rhubarb is grown from a crown.  This is a thick rhizome that is planted just below the surface of the soil.

Rhubarb plants like lots of moisture and you need to mulch the plant to keep it from getting too dry.

The best rhubarb is available in Spring.  The earliest rhubarb you can buy is forced, this means it has been grown in the dark. Forced rhubarb has pale pink stems and is tender and sweet.

Rhubarb grows throughout the summer but as the season progresses the stems become tougher.

I have several well-established crowns of rhubarb in my garden. They have been in the garden for at least 50 years and pop up every year providing lots of delicious rhubarb stalks. 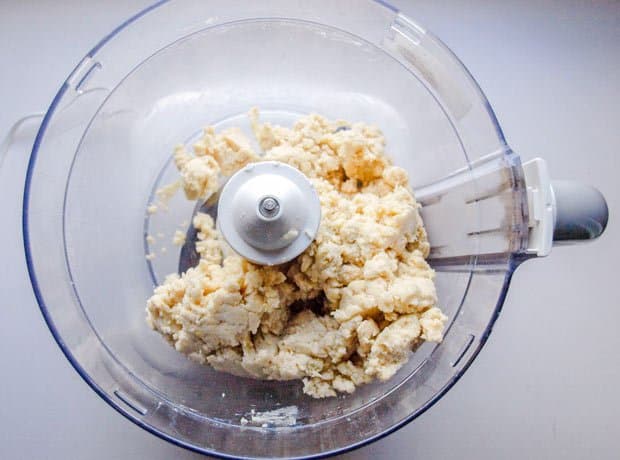 I add ground almonds to the pastry for the Rhubarb Bakewell Tart but if you don’t have enough then add the equivalent amount of flour. 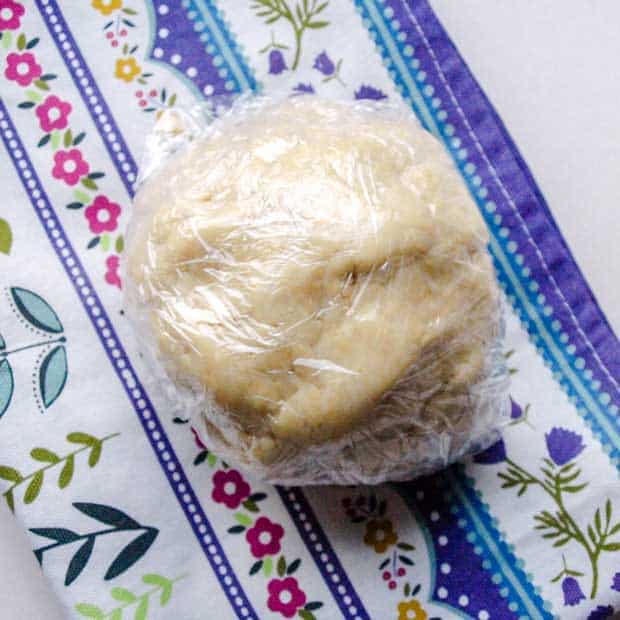 Bring the pastry together into a dough and knead lightly for only a minute, then wrap in film and put in the fridge for at least 20 minutes. 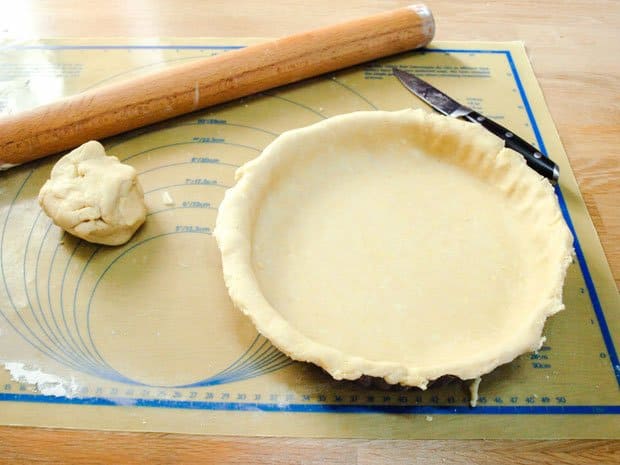 Roll out the pastry and gently lift it into the tart tin.  Leave a bit more around the edge because pastry shrinks a little when it bakes.  Trim off any excess once the pastry has been blind baked. 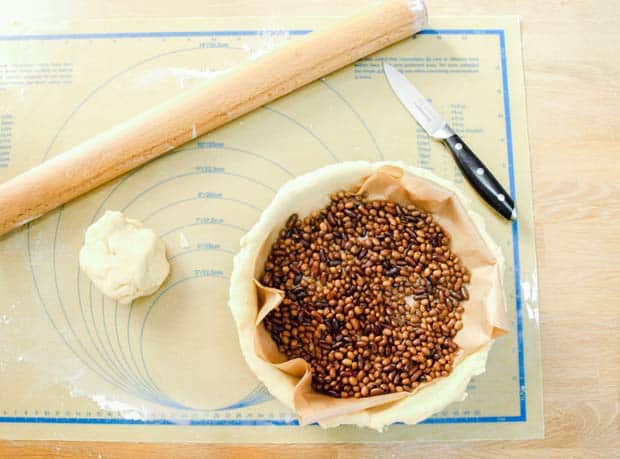 Place a piece of baking parchment onto the pastry and top with baking beans or dried peas, beans or rice.

Bake blind for 15-20 minutes, then remove the paper and beans and bake for another 5 minutes. Remove from the oven and leave to cool.

Why do you Blind Bake your pastry case?

Blind baking simply means baking the pastry shell before filling it. If you put a wet filling into an unbaked pastry case the base is unlikely to cook properly and you will get a ‘soggy bottom’ rather than a crisp bite of buttery crust. 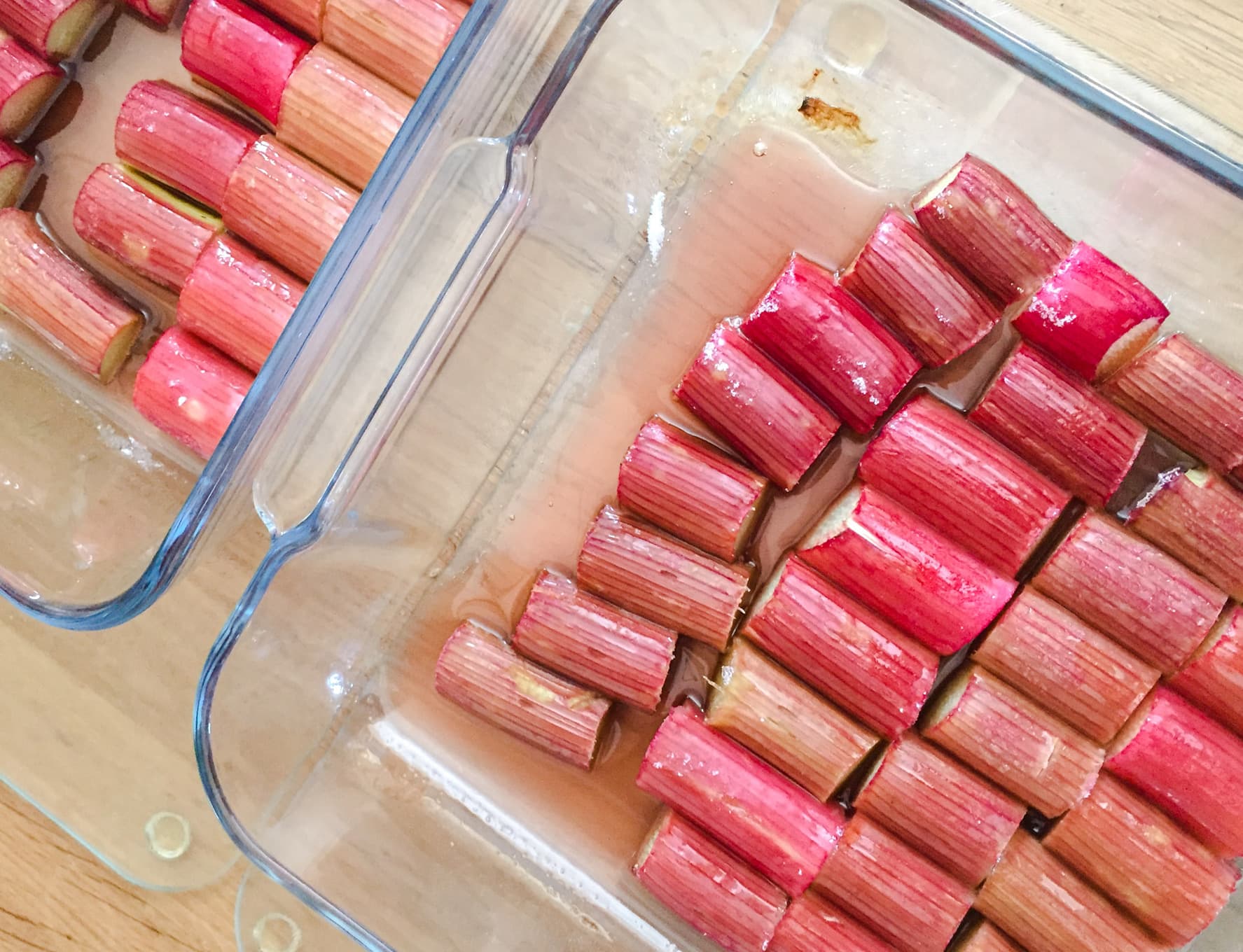 Wash your rhubarb and cut it into 3 cm lengths.  All the rhubarb pieces should be about the same size because they will then cook evenly. 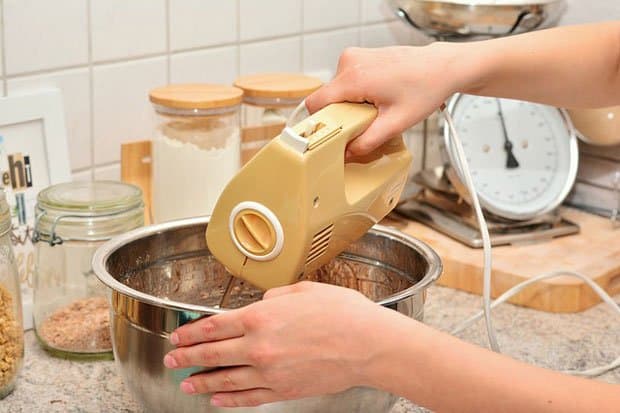 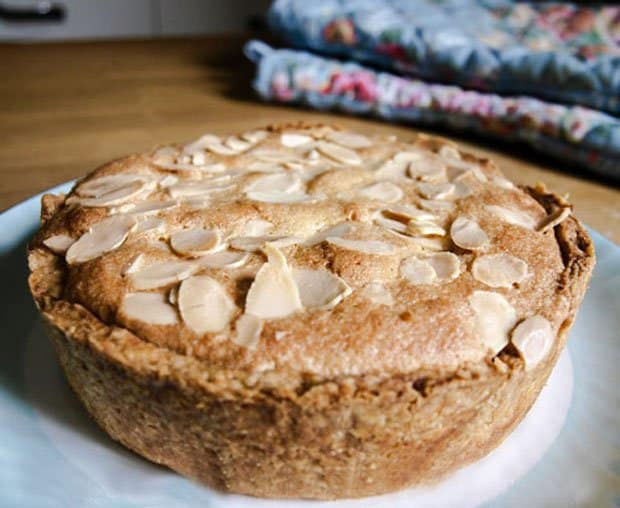 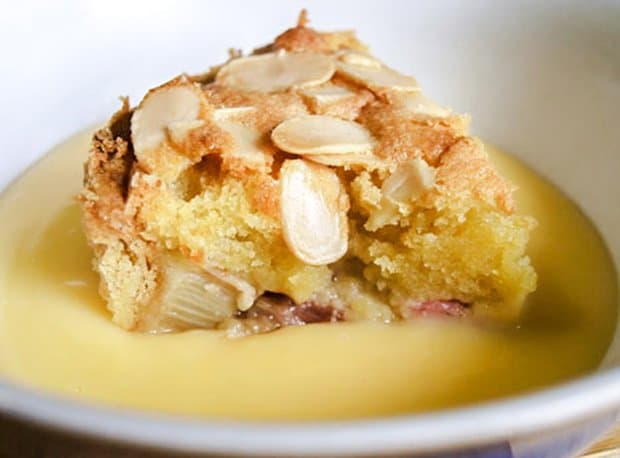 Serve this simple Rhubarb Bakewell Tart warm with custard (creme anglaise), cream or ice cream.  You can also serve it cold in small slices with tea or coffee. 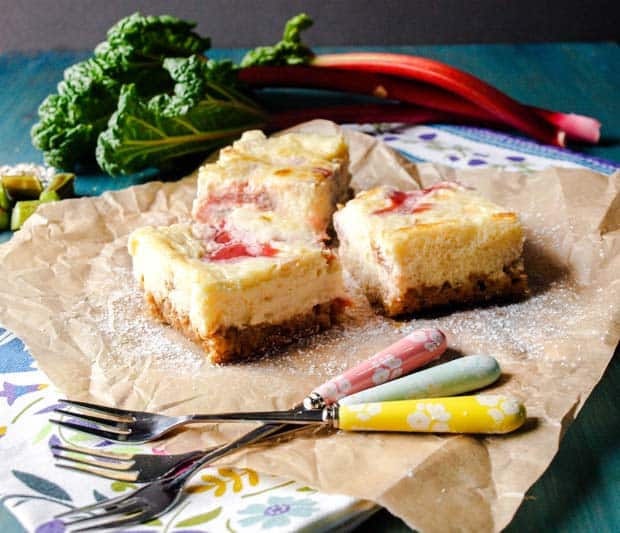 Rhubarb Cheesecake Bars are a delicious combination of flavours and textures.  The base is a bit like a flapjack, sweet, crisp and oaty and it is topped with a creamy rhubarb cheesecake.

This Easy Rhubarb Tart recipe creates a really delicious dessert from simple ingredients. Make your own melt in the mouth shortcrust pastry or use ready-made all-butter pastry for an even quicker fix.

Rhubarb Fool is one of the top ways to serve rhubarb as a cold dessert.  I add orange zest to my Rhubarb and Orange Fool, because the zesty flavours of orange bring out the rhubarb flavour too.

Raspberry Bakewell Traybake – A Mummy Too 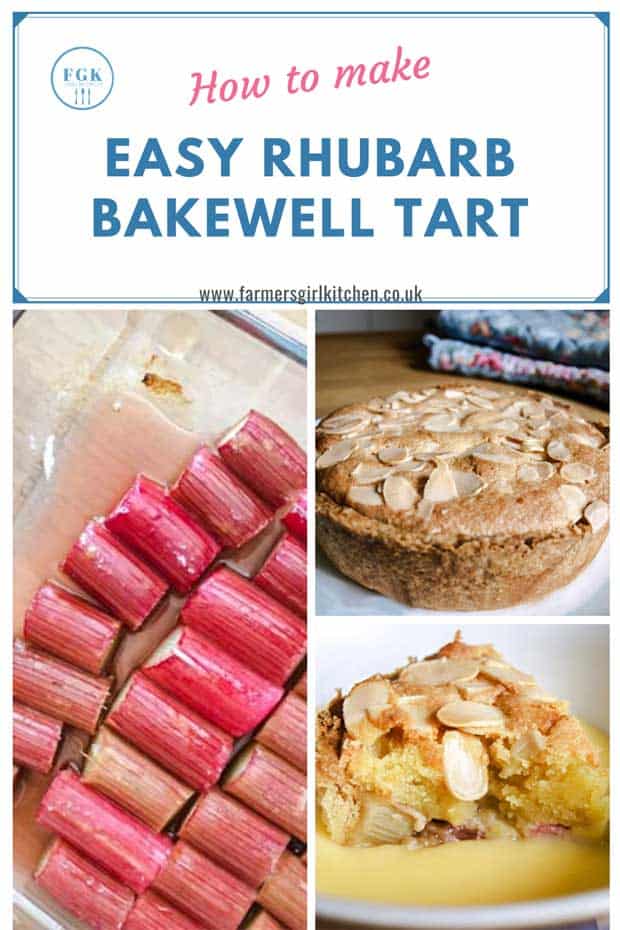 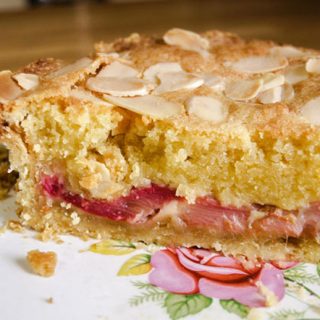 Without a Food Processor Rub the fats into the flour with your fingers, stir in the ground almonds then add the egg and bring the pastry together with a knife, then proceed as per the recipe.  Quantities As this recipe is made for quite a small tin (16 cm), you can double up the ingredients to make two tarts or to make a larger tart in a 25cm tart tin.

Your tart looks delicious! This is a great idea for a comp too! I'd love to hear what everyones suggestions are at the end 🙂

My may Day dish would be Elderflower and Gooseberry Fool,which I will be sharing my blog this year! Karen

Thanks Emma – I'll do a round up when the comp is finished.

Ah Karen – I knew you would have a May Day dish up your sleeve or at least on your blog! Thanks for entering.

This looks so delicious, What a great idea and that top photo is fantastic. Better get my thinking cap on!

I would make rhubarb tart

I have an elderflower recipe to try out, if it works that will be a good MayDay celebration blog! Asparagus & goat cheese tart also to make an appearance. I love rhubarb and yours looks fab, another one to try!

Rhubarb Crumble with Cream or Custard

It would have to be rhubarb and custard cupcakes.

I would make rhubarb muffins

A lemon drizzle cake, as it is such a sunny cake.

looks delish! I would eat that 😉

Really lovely idea. I will definitely be giving your Rhubarb Bakewell a go. I do one with fresh raspberries at the bottom but Rhubarb would be just as good.

Lovely recipe! Yum yum yum. I can't think of a British traditional recipe for May Day but how about a Finnish recipe Tippaleivät which are like a sweet doughnutty type snack.

You can see a recipe for them here http://scandinavianfood.about.com/od/pastryrecipes/r/Finnishfritters.htm

I'm hoping to blog about these next week xx

oh, think i already posted through that damned rafflecopter thing?? hope i did anyway. i'm @katscreamy on the twit

ah sorry about that and thanks for letting me know. I’ll change the instructions. Hope you managed to find an alternative use for the extra pastry.

How lovely of you to comment, June. It is really appreciated, I hope you enjoy the Rhubarb Bakewell Tart, it makes a nice change from pies and crumbles.

That looks yummy. I remember my Dad growing his own rhubarb in the garden and my Mum used to make rhubarb and apple pie. I’ve never tried baking with rhubarb myself though, but your insructions look so easy, I’d love to try and make this.

Thank you, Veronica. What great memories you have of rhubarb, I think it’s because it’s the first thing that comes through in the garden or allotment that we treasure it so much.

I love bakewell tart and I love rhubarb so this is my perfect dessert!

This sounds so delicious! What a great idea!

Such a lovely rhubarb recipe Janice and I remember when we did the Big Rhubarb Recipe Link Up! We had over 60 recipes! I love rhubarb and ours is ready for cutting in the garden. Karen

Thank you. Yes, so many lovely recipes were shared.

I do love rhubarb and bakewell tart equally and what a great idea to bring them together. Gorgeous looking rustic tart!

Thanks, Jo. Rustic is definitely my style, it’s all about the taste!

I love a good mash up!

Well I know where I’m heading for Sunday lunch if this bakewell tart is on offer! Looks and sounds amazing Janice! I’ll bring the custard!:-) Thanks for linking up to #CookBlogShare. Michelle

Thank you, Michelle. I’ll get the roast on too!

Oooh, yum! I love rhubarb and I love bakewell tarts so this one definitely gets a thumbs up from me!

Thank you, I love a Bakewell tart.