You could be forgiven for thinking that I am posting about Scotland, but rather it is ‘New Scotland’: Nova Scotia.  I started my second day in Halifax with a visit to The Citadel Historic site, part of Parks Canada.  I arrived just at the Changing of the Guard, which happens every two hours so most visitors are likely to get the chance to see this impressive display. 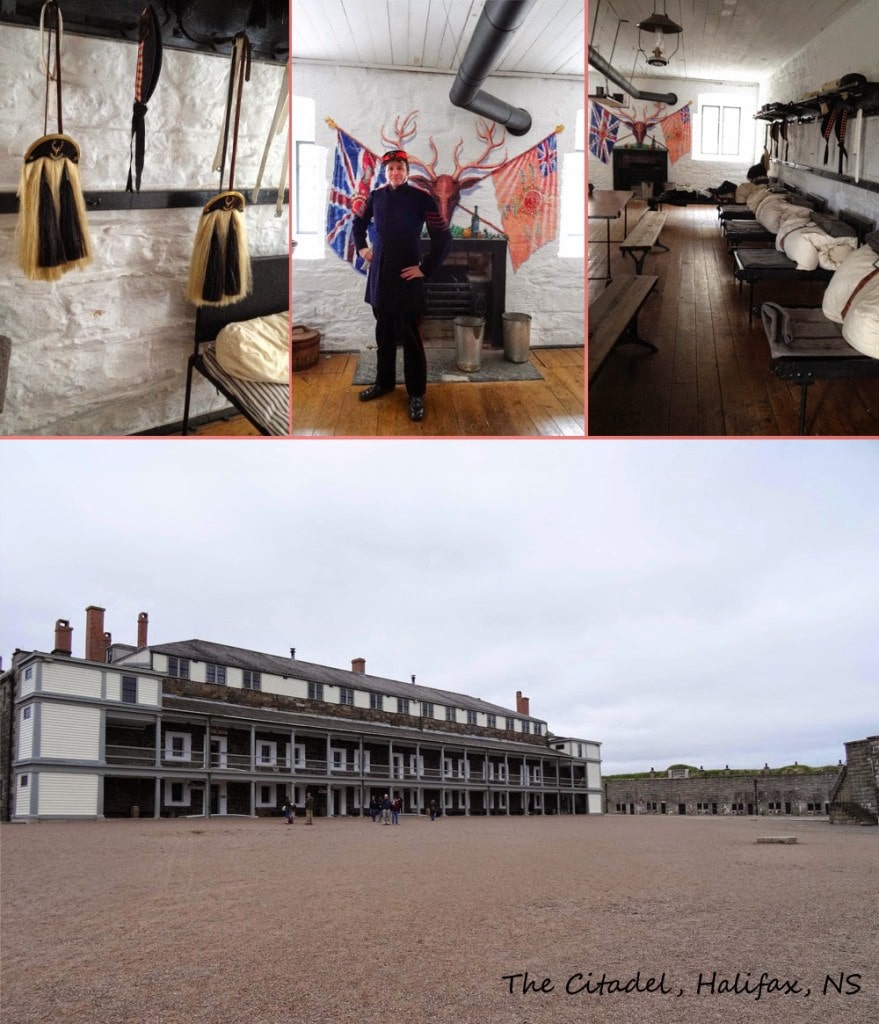 My tour guide at The Citadel was Craig, who is the ‘School Master’ for the Citadel, that’s him standing in front of the fire in the soldier’s quarters.  When the Citadel was reconstructed and developed into a visitor attraction, they had to choose one regiment to be represented, there were many to choose from but they decided to feature the 78th Highlanders, hence the kilts and sporrans. It was fascinating to hear about the lives of the soldiers, how they cooked and ate and entertained themselves.  The lengths that the Army went to try to keep them at the Citadel rather than visiting the town, including  bringing in locally brewed beer which contributed to the fortune of Alexander Keith’s Brewery! It seems that no matter what was provided at the fort, it was unable to compete with the attractions of the town! 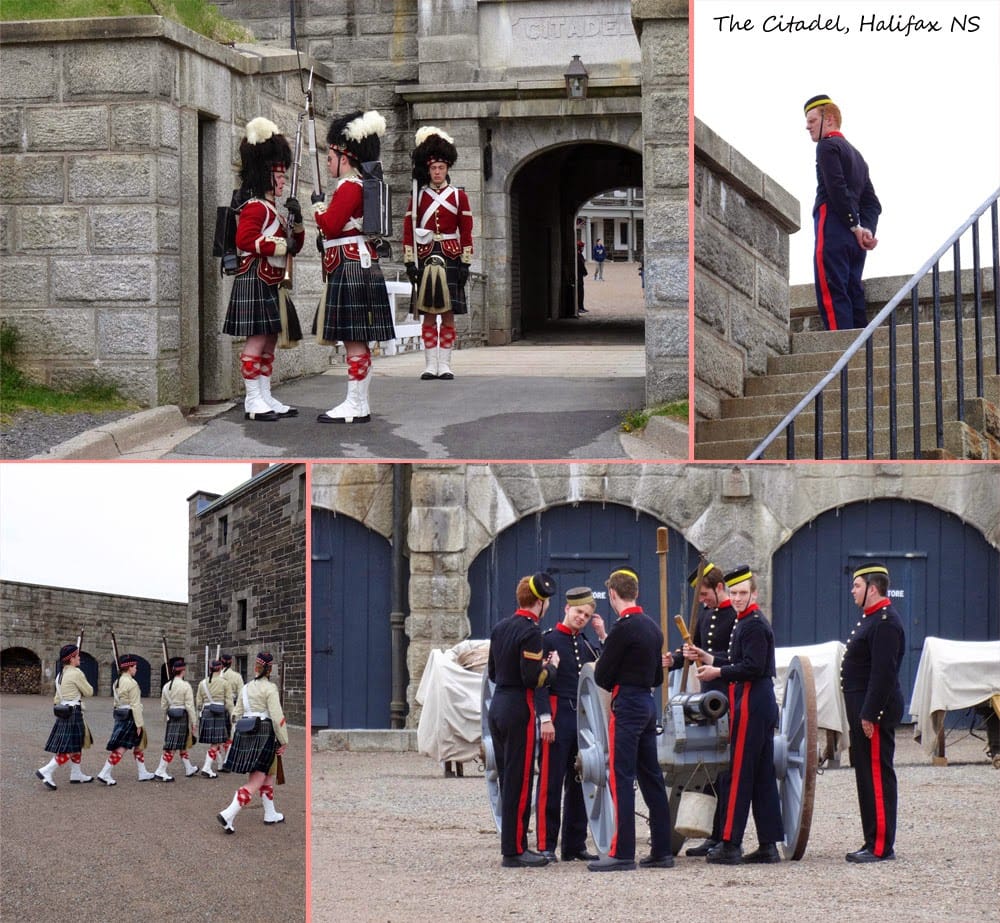 What impressed me most about the Citadel were the ‘soldiers’.  When I first arrived I thought they really were soldiers, but in fact, they are students who are recruited for the summer season. They are drilled and trained in soldierly skills and also in the history of the Citadel, so they can take visitors on tours of the site.  In addition to the 78th Highlanders, there is  an Artillery Regiment, who were learning how to fire the cannon and going over the drill time and again until  they become skilled enough to fire the 12 o’clock gun each day. The presence of these student soldiers, and other costumed characters, really brings the Citadel to life and makes it a living museum.

As a fan of Bernard Cornwell’s Sharpe stories (I’ve read all the books), which are based around the same period of history as the Citadel’s hey day, I recognised many aspects of the history of Citadel and the lives of the soldiers and was thrilled to see some rapid load and fire with an original rifle from the late 19th Century.  It was incredibly loud and you will see from the video clip that it made me jump! 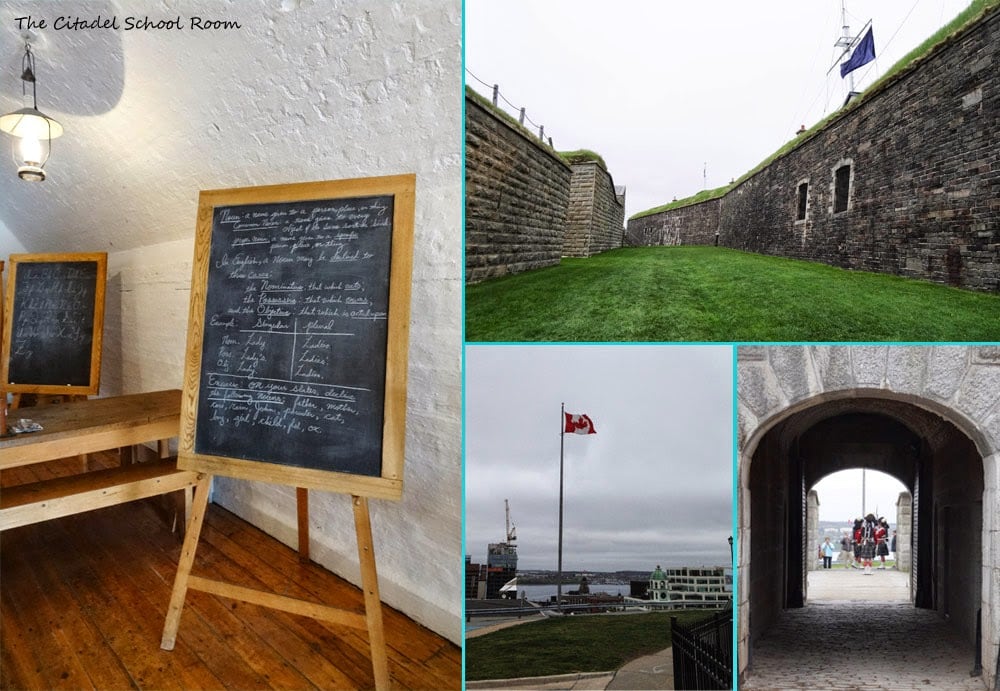 One of the benefits of joining the Army was access to education and the School Room at the Citadel was the place where the soldiers  came to learn. Some would have been learning basic reading, writing and arithmetic, but the artillery required a higher level of knowledge including chemistry and geometry to ensure that the canon fire was effective and accurate.    My tour ended with a walk around the moat and the revelation of the remarkable star shape of the Citadel, and other impressive design features which  along with the strength of its position, made it a fort which was never attacked.

I would certainly recommend any visitor to Halifax to head to the Citadel and find out about the military history which is so much a part of the development of the town of Halifax.

This is the second in a series of posts about my trip to Nova Scotia,Read the first part of my Nova Scotia adventure: The Bridge, The Bison and the Four Poster Bed    and the next episode in my adventure involves a Food Tour of Halifax, I’m looking forward to re-living it!

Disclaimer: I was the guest of the Canadian Tourism Commission and  Nova Scotia Tourism and all my flights, car hire, accommodation and meals were included, as well as all trips, excursions and special cookery sessions with local chefs. I’d like to thank the host organisations and everyone who made this a truly memorable trip.
Photo Montage templates from The Coffee Shop