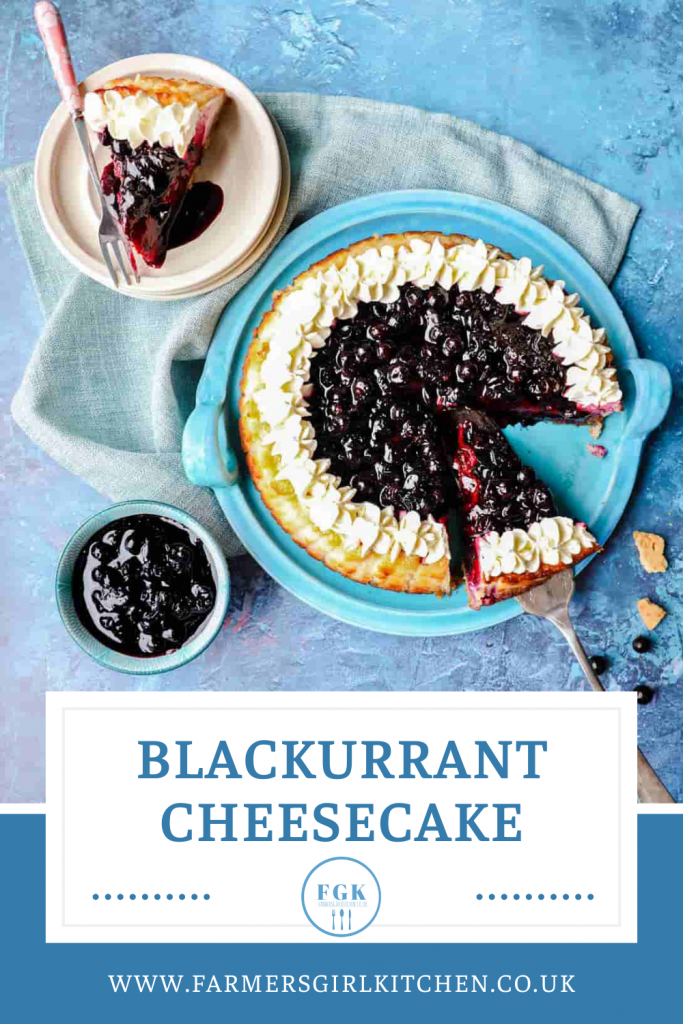 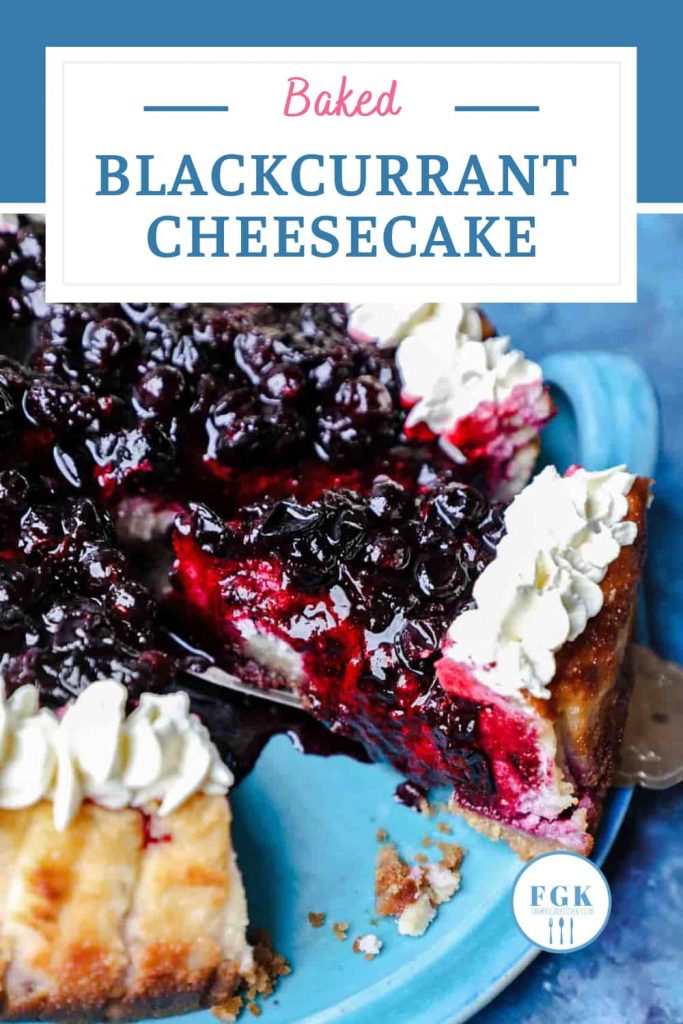 Blackcurrant Cheesecake is a rich and indulgent baked cheesecake with a contrasting blackcurrant swirl and blackcurrant compote topping. It’s easy to make and makes a real showstopping summer dessert.

Blackcurrants are small tart berries that grow on a woody shrub that is part of the Ribes family. They are easy to grow in the garden and will even grow well in containers. Blackcurrants ripen in mid-summer and are ready to pick when they turn from dark red to black.

Where can I buy blackcurrants?

Buy blackcurrants at farmers markets or from reputable greengrocers. They may have to order them and fresh blackcurrants are only available in June and July in the UK. However, it is possible to buy frozen blackcurrants and they work perfectly in this recipe.

How do I grow blackcurrants?

Read my Step-by-Step Guide: How to Grow Blackcurrants for all the information you need to successfully grow your own blackcurrants in the garden or in a container.

Are blackcurrants banned in the US?

There isn’t a single answer to this question. However, in 1911 all varieties of Ribes including blackcurrants and gooseberries were made illegal to grow in the US because they were carriers of white pine blister rust an infection that could damage white pine trees.

Because of the federal ban currants and gooseberries weren’t grown at all in the US until the ban was lifted in 1966. So now the regulations vary from state to state.

Can I freeze blackcurrants?

Yes, they freeze really well and it’s a good idea to freeze them when you can get them. Lay them in a single layer on a tray and freeze until solid, and then store in a freezerproof container.

How long can I keep frozen blackcurrants?

If properly frozen and well stored, you can keep frozen blackcurrants for up to 12 months. I have kept them for up to two years and they have been fine once cooked.

How to make Blackcurrant Cheesecake

Follow the simple step by step instructions to make this delicious dessert.

Make the Blackcurrant Cheesecake base

Place all the ingredients into the bowl of a food processor and whizz to combine.

Once cooked, leave the Blackcurrant Cheesecake to cool in the cake tin. Don’t worry about any cracks ont he surface, these will be covered by the blackcurrant compore.

To assemble the Blackcurrant Cheesecake

Put the double cream into a bowl and whip until it is thick enough to pipe.

How do I serve Blackcurrant Cheesecake?

Serve slices of Blackcurrant Cheesecake with a spoonful of blackcurrant compote and some extra pouring cream, if liked. The rich creamy cheesecake is pefectly complemented by the sweet, tart blackcurrants making it a real favourite.

Summer Pudding with Scottish Berries
A delicious traditional British summer no-bake dessert made with white bread and Scottish strawberries, raspberries and blackcurrants.
Check out this recipe

Summer Pudding Ice Lollies
A summer berry compote frozen into a refreshing ice lolly or popsicle.
Check out this recipe

Rhubarb Cheesecake Bars
A sweet oaty base topped with rich, smooth baked cheesecake layered with pieces of tart, roasted rhubarb, and even more rhubarb puree swirled on top.
Check out this recipe

For the fruit puree

For the cheesecake filling

To make the base

To make the puree

To make the cheesecake mix

To make the compote

This recipe was first published in 2009

I’m adding this recipe to Cook Blog Share, the link up for delicious recipes. This week it is hosted by Karen at Lavender & Lovage.