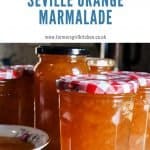 Easy Homemade Seville Orange Marmalade is the perfect breakfast preserve to serve with toast. It is really not difficult to make and there is a whole world of difference in taste between homemade and commercial marmalade. 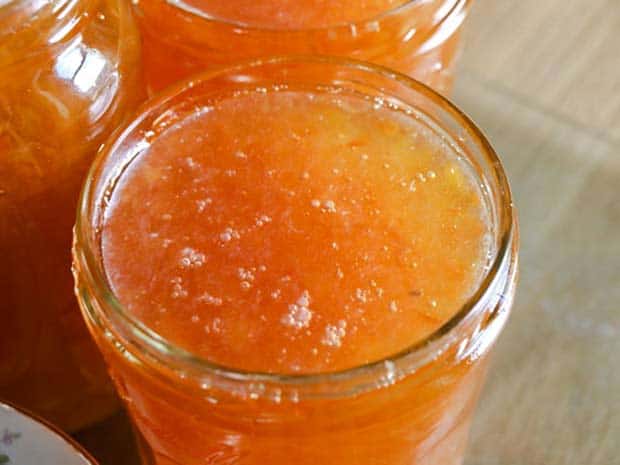 My mum always made her own marmalade in January.  She would mince the peel with an old fashioned manual mincer, I would help her by turning the handle as she fed in the peel.

I started making marmalade in my early 20s when I first got my own kitchen.  I much prefer the sharp fresh taste of homemade Seville Orange Marmalade to the milder taste of commercially produced marmalade. 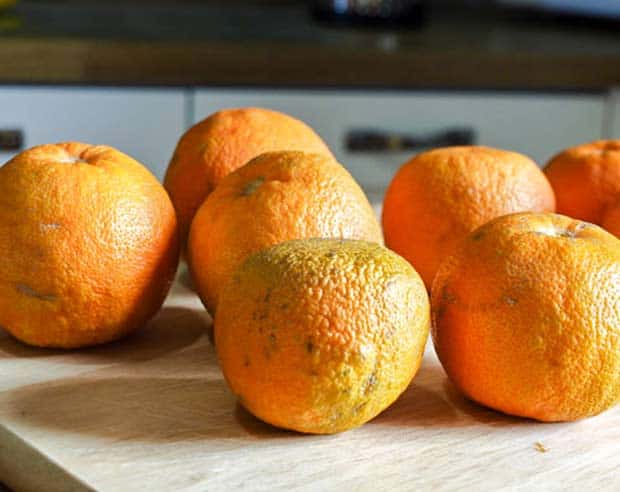 What are Seville Oranges?

Seville Oranges are a bitter orange with a thick bumpy peel.  They taste a little bit like lemons but not quite so sharp.  The oranges are imported from Spain and are available in the shops in the UK in January.

I can’t get Seville Oranges, can I still make marmalade?

Make a Three Fruit Marmalade using sweet oranges, grapefruit, and lemons.  The flavour is different but you will still have a delicious marmalade.

Can I double the quantities to make more marmalade?

I do not recommend you increase the quantity of marmalade in this recipe.  Please be aware that this recipe has been tested for the amounts stated on the recipe card.

How do you sterilise your jam jars?

I sterilise my jam jars and metal lids by thoroughly washing and rinsing them. I then put them, still wet, upside down onto a baking tray and place it in the oven at 150C just before I start to make the jam.

The water creates steam which helps to sterilise the jars. I take them out of the oven and fill them with the hot jam, then put on the lids. There are other methods but this is how I sterilise my jars. 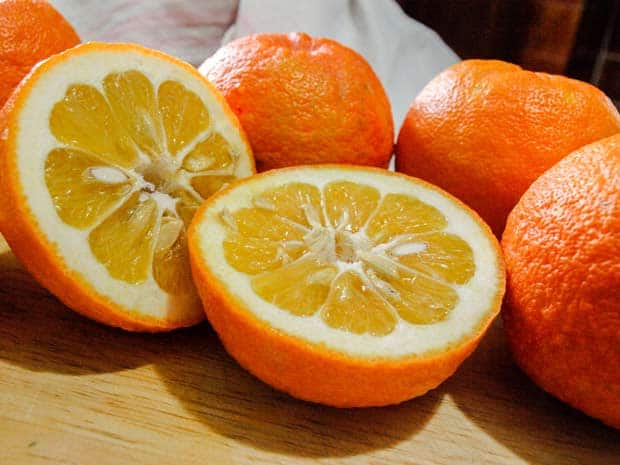 Cut the Seville Oranges and the lemon in half and, use a lemon squeezer to squeeze out the juice into a jug. 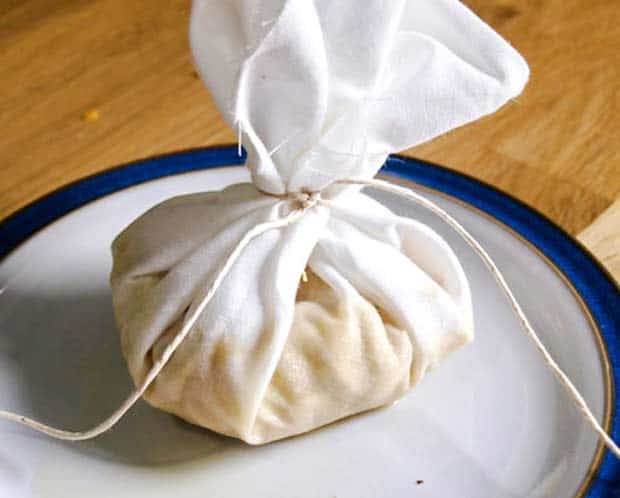 Remove all the pips and tie them in a muslin cloth or jelly bag.  The pips provide pectin, the setting agent for the marmalade.  But you don’t want them in your preserve so they go into the pot in a bag. 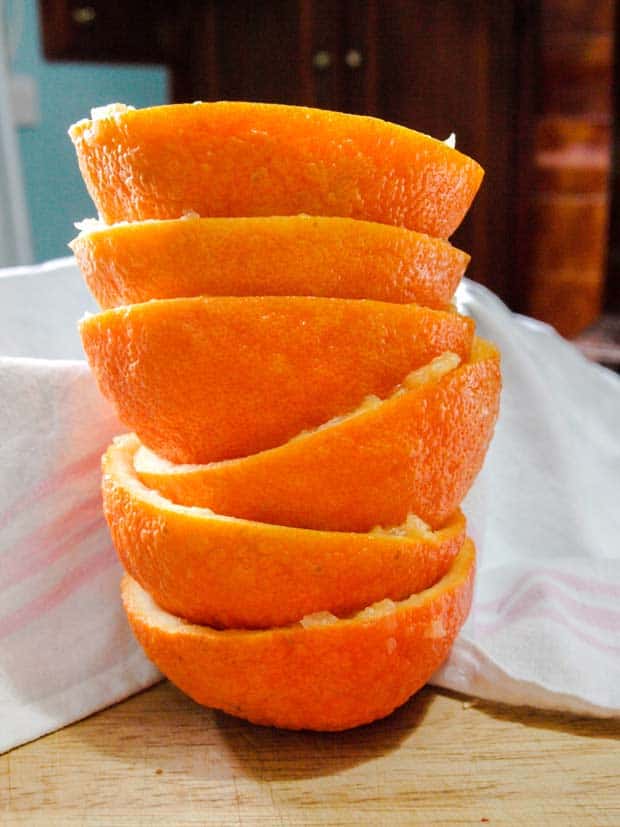 You now have a stack of empty Seville orange halves.  Make sure you check thoroughly for pips as they hide in little pockets in the pith.

Choose whether you want to make traditional shred marmalade or my Easy Homemade Seville Orange Marmalade. 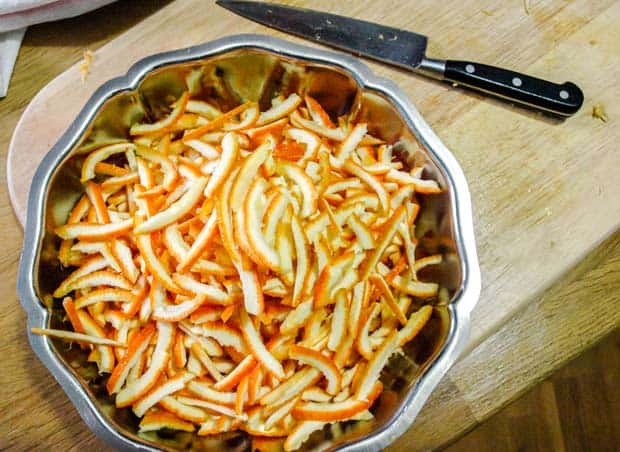 Shreds to be soaked overnight

If you choose to make shreds, scrape out as much pith as possible. Slice the peel with a sharp knife and soak the shreds in water overnight.  Use the soaking water to make the marmalade. 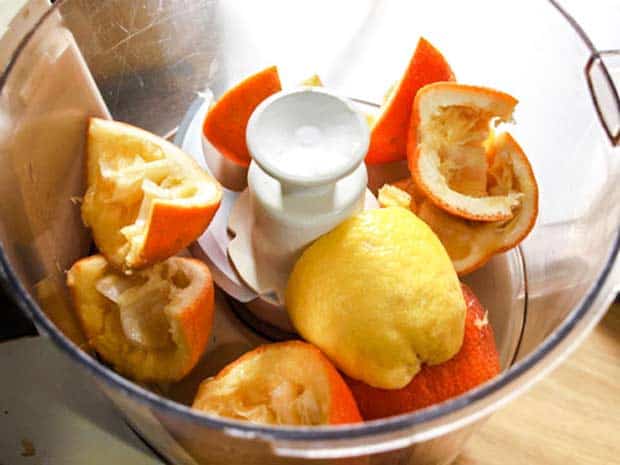 Use a Food Processor – no overnight soak

If you choose to make the Easy Seville Orange Marmalade, put the peel into the food processor in batches and process until the pieces are the size of small peas.  Ther is no need to soak the peel, you can start to make marmalade right away. 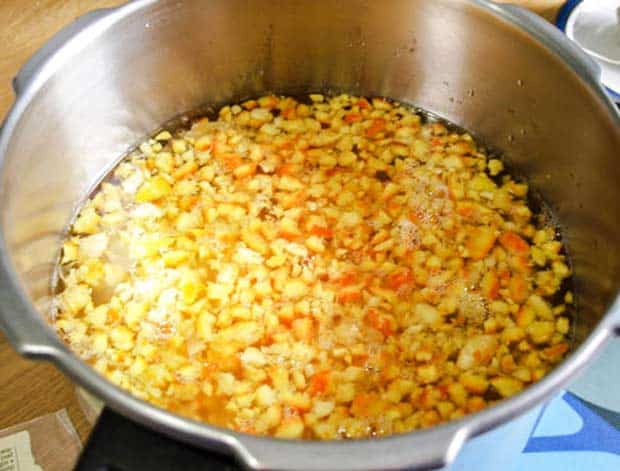 Put the juice, water, and chopped peel into the pan, add the muslin bag of pips.  Simmer for approximately 1 1/2 hours until the peel is soft and the liquid is reduced by half.
Take out the muslin bag and squeeze out any liquid into the pan.  Stir int he sugar over low heat until dissolved.  Bring to a rolling boil until the marmalade reaches setting point.

I  learned about making jam and marmalade from my mother and grandmother.  A lot of what you learn in cooking and baking is very visual.  It’s much easier to understand when you can see what you are aiming for.  So here is a little help with the main techniques for jam making. This video will show you what a ”rolling boil’ looks like.

How do I know when the marmalade has reached setting point?

Once the marmalade has boiled, you will need to check if it will set (firm up) once cooled.  There are many different ways to test for setting point.  You can use a jam thermometer, you can use the ‘flake’ test, but I have always used the wrinkle test.

You need to place some saucers in the fridge before you start making the jam.  Then once you have boiled your jam for 15 minutes, take the pan off the heat and put a teaspoon of the jam onto one of the cold saucers.

Place the saucer in the fridge and leave for 5 minutes.  Then remove the saucer and push your finger across the jam.  If it wrinkles, you can skim off the froth and pot up your jam.  Wrinkle Test Video

My marmalade didn’t wrinkle – what do I do?

If you haven’t got a wrinkle, put the pan back on the heat and boil for another five minutes, then test for set on another cold saucer.

As you can see food processor marmalade is less clear than shred marmalade.  This isn’t a marmalade to enter into a show, it is a quick and delicious homemade marmalade to enjoy with your toast in the morning or perhaps to use as an ingredient in a recipe. 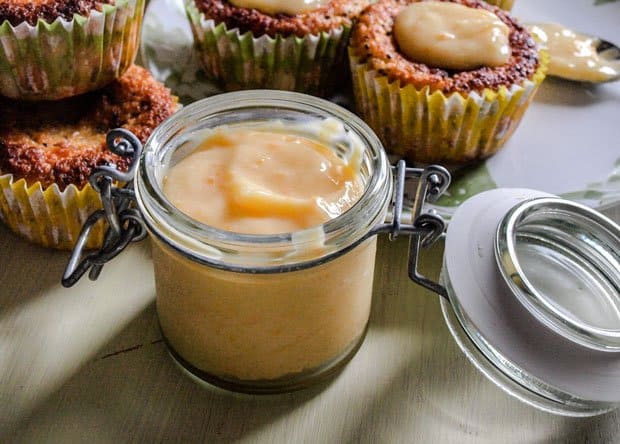 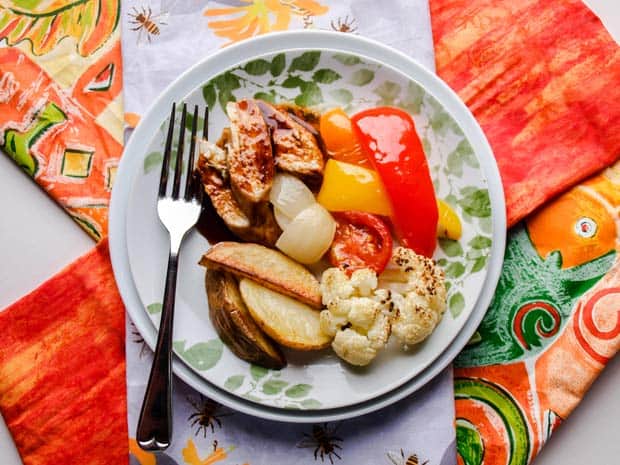 Sticky Marmalade Chicken is a barbeque style chicken recipe with a sticky glaze and a sweet and sour sauce. 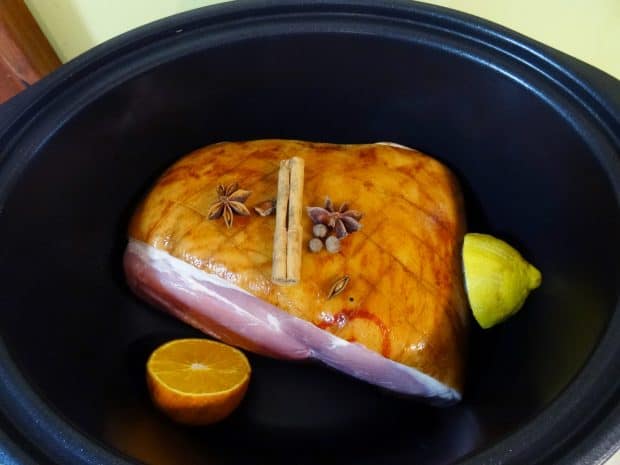 Slow Cooker Spiced Ham with Oranges and Lemons.  I didn’t use Seville Oranges in this recipe but they would be absolutely perfect to give a strong citrus flavour. 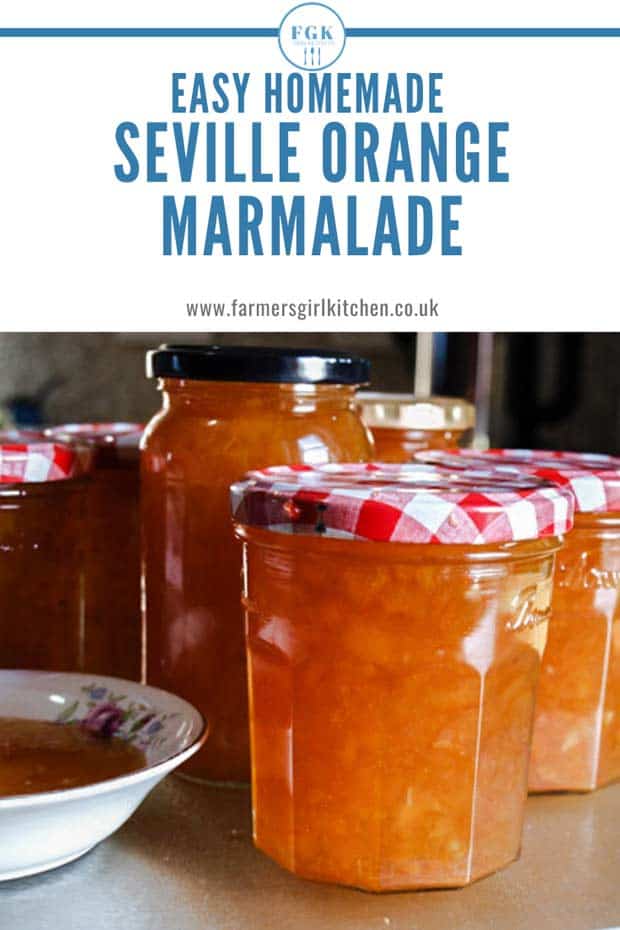 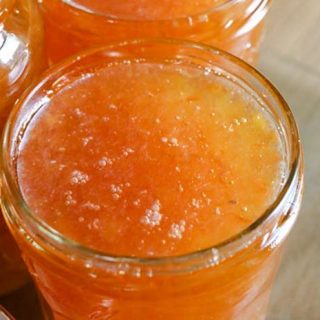 This recipe makes approximately 4 kg of marmalade, this is about 9 standard jam jars.  The calorie calculation is based on 14 servings per jar.  Easy Homemade Seville Orange Marmalade will keep for a least a year if the jars are properly sterilised and sealed. Marmalade sets easily so there is no need to use jam sugar or additional pectin.  I use granulated can sugar.

Oh that looks delish, I'm so jealous now as I've never made marmalade, only strawberry jam. I always used to buy homemade from the WI when I lived near one, but I must get on and make some myself, I just need some muslin!

Thank you all. Sue you are probably right about my Mum's marmalade it is always really good! She has won lots of baking competitions through the SWRI (Scottish equivalent of WI), but doesn't enter any more.

Thank you Karen, more like the three bears I think! Paddington Bears, of course.

One very happy Paddington Bear here, or should I say a husband with a really happy grin on his face. This marmalade is straight forward to make and tastes lovely. Thanks for helping a puzzled Swiss out 🙂

I’m glad you found it easy to make and that your husband liked it too. I try to make my recipes easy and tasty and I need to get my own marmalade made next weekend!