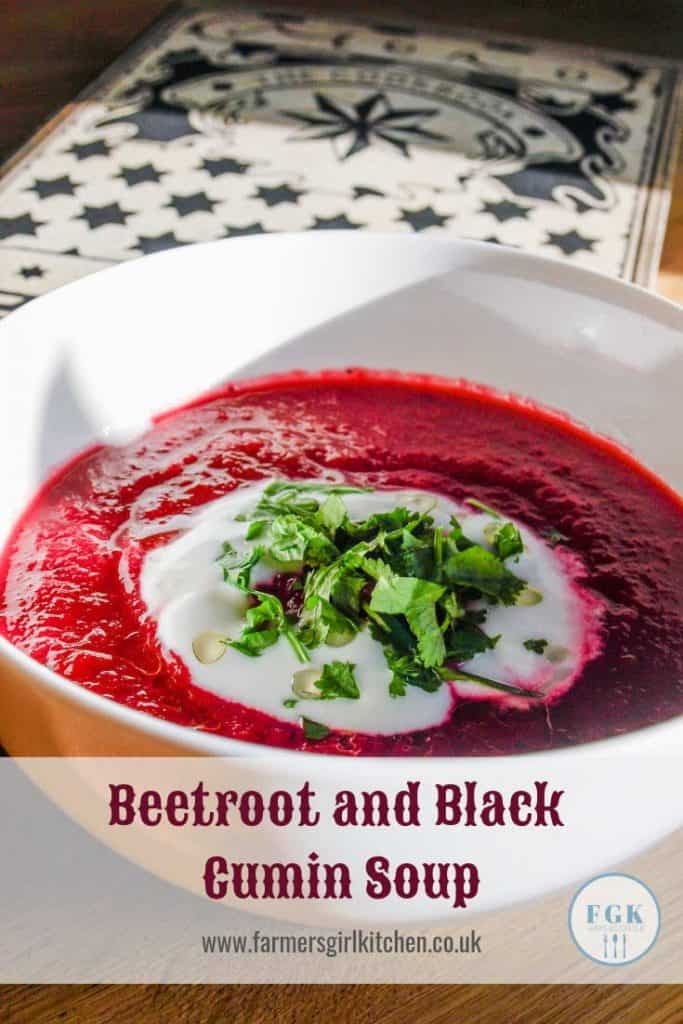 Beetroot and Black Cumin Soup is such a beautiful rich red colour and it looks so good with a contrasting spoonful of yogurt and some finely chopped parsley.   Add a drizzle of olive oil and the sweet an sour taste is a revelation .
It’s a recipe from The Moro Cookbook, read on and I’ll tell you some more about the cookbook and give you the recipe for this hearty soup.
Dom at Belleau Kitchen has invited us to cook from a new cookbook.  Now I only got one cookbook for Christmas and it features nothing but…CHOCOLATE!
However, the house is still full of chocs and biscuits, the fridge still has two jars of homemade mincemeat and we have only just finished the Christmas cake, so I really couldn’t face making any more sweet things.
So instead I turned to the books I won from Ren Behan the prize was all three of the Moro cookbooks by Sam and Sam Clark.
I randomly chose the original Moro book from the three.  Then I opened the book randomly and found that I had chosen Beetroot Soup with Black Cumin.

How to make Beetroot and Black Cumin Soup

I grow my own beetroot in the garden but I made this soup before we had built our raised beds in the garden, so I bought four organic beetroots for the recipe.

Peel the raw beetroots and chop them into chunks, you might want to wear rubber gloves as otherwise, you will end up with very red stained hands!

As well as the beetroot, there is onion, garlic and a diced potato in the Beetroot and Black Cumin Soup – oh and, of course, black cumin seeds!

The recipe is really very simple with all the ingredients going into the pot then, once cooked they are blended to a smooth puree.

The soup was very easy to make and looks incredible, it has an interesting sweet and sour taste with the combination of the sweet beetroot and the red wine vinegar.

I was a bit disappointed that I couldn’t taste the cumin and I did actually use black cumin but I can’t say it was obvious.

I would make it again but might increase the amount of cumin, or maybe use some ground as well as cumin seeds.

Baked Beetroot with Honey and Thyme