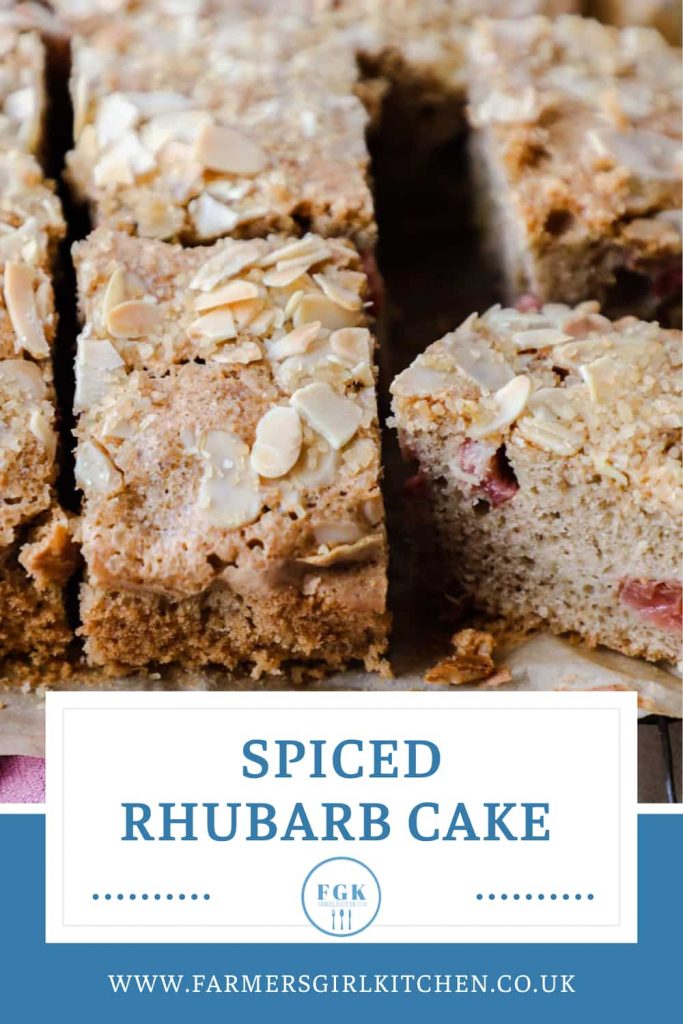 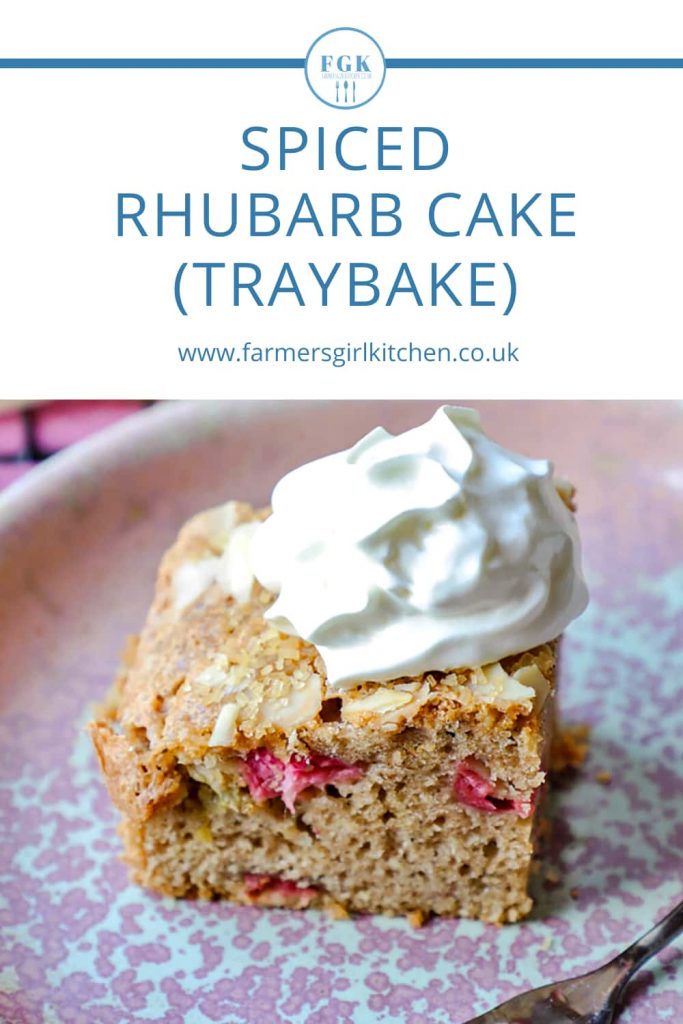 Spiced Rhubarb Cake (Traybake) is a delicious and simple one-bowl cake made with fresh rhubarb, cinnamon, ginger, and cloves. It has a sweet and crunchy topping of flaked almonds and demerara sugar that makes it really special.

There are only so many crumbles, tarts, and stewed rhubarb I can face eating. A rhubarb cake makes a nice change and this traybake cake is just sweet enough to eat on its own or to serve with whipped cream as dessert. It’s a classic coffee cake in the American tradition, that is, it doesn’t contain coffee, but you eat it with your coffee!

What makes this cake really sing is the combination of cinnamon, cloves, and ginger. It’s the perfect cake to win over people who think they don’t like rhubarb as the predominant taste is the spiced cake. Cut the pieces of rhubarb small and what you taste are little bursts of sweet fruit flavour.

How easy is it to make Spiced Rhubarb Cake?

It is a very easy cake to make. You make it in one bowl and can beat it by hand with a wooden spoon. Use a stand mixer, if you have one because that is even easier. Simply put all the ingredients into the mixer bowl and let the machine do the work.

Rhubarb is actually a vegetable that is mainly served as a fruit. I know it seems strange but tomatoes are a fruit and we serve them as a vegetable, so it’s really not quite so strange after all!

Rhubarb is a hardy perennial plant that has edible pink, red, or pale green stems and large dark green leaves. Don’t eat the rhubarb leaves they are poisonous, you can safely put them on the compost heap, just don’t eat them.

Rhubarb has a tart flavour and is really too sharp to eat raw, but combine it with sugar and other ingredients and it has a delicious tangy taste that is ideal in desserts.

Rhubarb is easy to grow and likes the cool damp climate of Scotland. It’s more difficult to grow in very warm dry parts of the world. Rhubarb grows from something called a crown. This is a thick rhizome (root) that is planted just below the surface of the soil. The Royal Horticultural Society (RHS) has lots of information about How to Grow Rhubarb.

Rhubarb stems grow in spring and early summer. The first rhubarb to appear in greengrocers is called forced rhubarb. It is grown in the dark under a cloche or in a special dark shed. Forced rhubarb is pale pink in colour and very sweet and tender. I grow rhubarb in my garden and it has a more robust stem. The stems become stronger and tougher as the season progresses. Pick the last stems of rhubarb at the end of July then let the plant rest until next year. It will die back completely over the winter and start to grow again the following spring.

What spices can I use in Spiced Rhubarb Cake?

Use Cinnamon, Ginger & Ground Cloves for this recipe. However, if you don’t like, or don’t have some of these spices then use any combination of these spices. Leave some out and increase the ones you do like.

Why not experiment with different spices such as cardamom, mixed spice, allspice, nutmeg or mace?

What is a Traybake?

The term Traybake is used differently in different parts of the world. According to Collins English Dictionary, a traybake is ‘a flat, usually chewy cake which is baked in a tray, cut into small squares, and served as a biscuit’.

I’m not sure about the ‘biscuit’ element of that definition, although flapjacks are more biscuits than cakes. I learned to make traybakes from Mary Berry recipes in the 1980s and they were almost always cakes.

Our traybake cakes are often called sheet cake or bar cookies in the USA. And a traybake can also describe a one-pan oven roast.

Why does this cake contain oil rather than butter?

I use oil in this cake because it makes it incredibly easy to make. Simply measure out the oil and add it to the other ingredients. There is no need to cream the butter and sugar together. Oil helps to keep the cake moist and it stays soft and moist for longer. It is also a good texture for cutting into pieces and does not crumble as much as a butter-based sponge. I use oil in my Chocolate Button Cake too and it has a lovely soft tender crumb due to the oil.

How long can I keep the baked Spiced Rhubarb Cake (Traybake)?

Keep the cake in an airtight cake tin or plastic box for 3-4 days. Keep it in a cool place if possible, but not in the fridge because that will make the cake dry out. If the weather is warm or you have a warm house, then freeze some of the cake if you won’t eat it all in a few days.

Yes, it freezes well. Leave to cool, then cut the cake into squares. Open freeze the squares on a tray, then store in a rigid container in your freezer for up to 3 months.

To defrost, simply remove the number of squares you need from the container. Place on a cooling tray and cover with a clean tea towel. The cake takes only 30 – 45 minutes to defrost completely.

How do I serve Spiced Rhubarb Cake (Traybake)?

I serve this cake as an anytime snack with hot or cold drinks. Spiced Rhubarb Cake is also perfect as a dessert, serve with a spoonful of poached or roasted rhubarb and whipped or pouring cream.