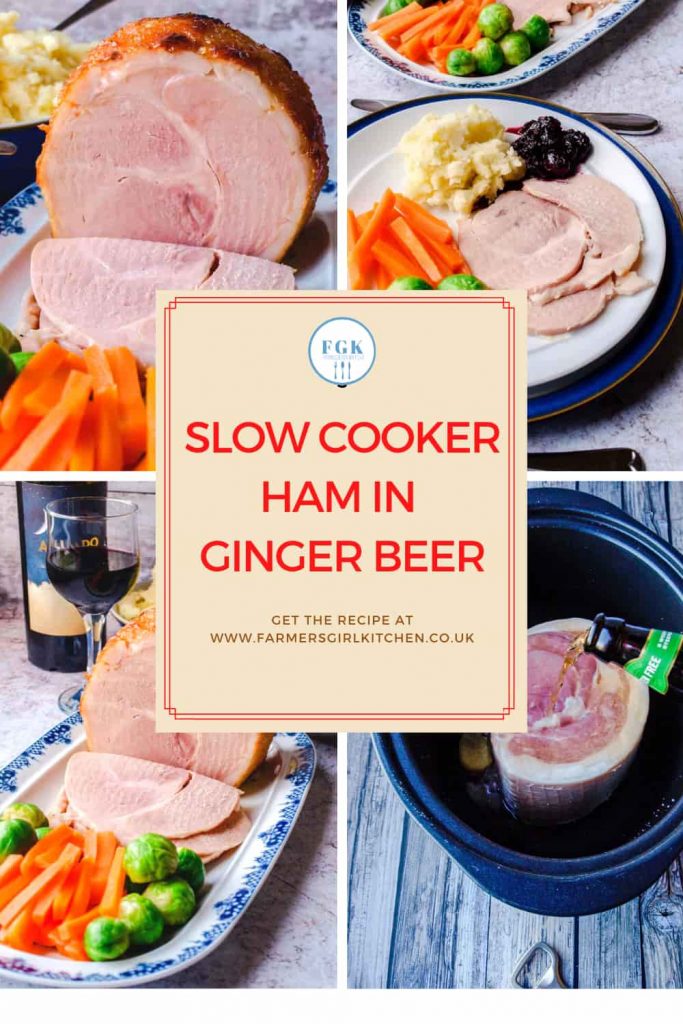 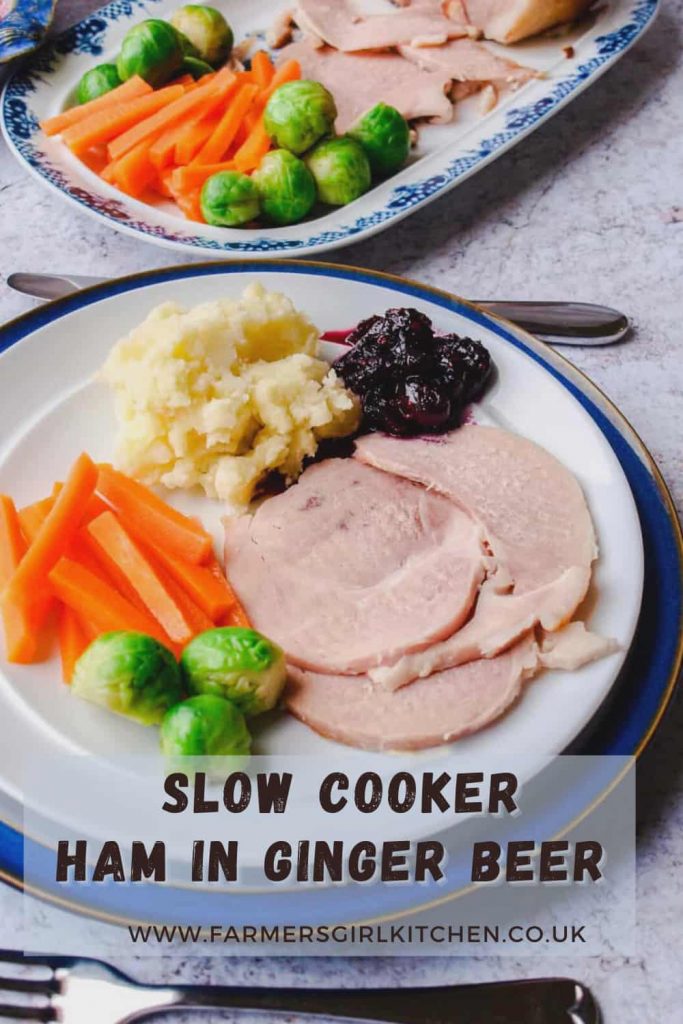 Slow Cooker Ham in Ginger Beer is a very simple recipe and the ginger beer adds a sweet and spicy flavour to a ham or gammon joint. Glaze with a sticky ginger preserve and serve it warm with mashed potatoes and seasonal vegetables or cold with salad and pickles.

Why cook Ham in Ginger Beer?

The idea for the recipe came to me from recipes to cook ham or gammon in other fizzy drinks like cola or cider. I really like anything flavoured with ginger so I thought I’d try ginger beer for this recipe.

I later found out that both Mary Berry and Nigella have recipes for Ham in Ginger Beer so I’m obviously in good company!

What kind of ham should I use?

This recipe is designed to cook a joint of ham or gammon. I prefer to use unsmoked for this recipe because it takes on more of the flavour of the ginger beer. But you can use either a smoked or unsmoked uncooked joint of ham.

What kind of Ginger Beer should I use?

Buy the best ginger beer you can afford. Look for a ginger beer with lots of ginger flavour and the more expensive brands sold in smaller bottles tend to have more ginger and a stronger flavour.

Why use a slow cooker to cook the Ham in Ginger Beer?

This recipe for Slow Cooker Ham in Ginger Beer has almost no preparation time.

Make the Slow Cooker Ham in Ginger Beer the day before, keep it in the fridge overnight and then add the glaze and oven roast as per the recipe.

Leave it to cook

It is ideal for busy days when you are going out to work or for fun. The ham is cooked when you come home. It is best with the glaze but you can eat Slow Cooker Ham in Ginger Beer just as it is from the slow cooker. You only need to add some vegetables or a salad to complete your meal.

Slow Cookers are brilliant for cooking ham and gammon joints. The slow cooking makes the ham really tender and it’s such a simple dish to make.

Put foil in the base of the roasting tin too, because the sweet, sticky glaze will stick fast to the tin. Whereas you can lift out the foil and it’s much easier to clean.

Ham so tender it falls apart

The ham is very tender, cut it into thick slices while still warm.  If you want to use the ham to serve cold then check out my method for Slow Cooker Ham for Cold Cuts

How to serve Slow Cooker Ham in Ginger Beer

Serve the Ham in Ginger Beer ham with mashed potatoes, brussels sprouts and carrots. If you like gravy, try my Easy Blender Onion Gravy

Or serve with this delicious three-ingredient Easy Cranberry & Red Wine Sauce which is probably my favourite Cranberry Sauce ever!

Although it’s not traditional to serve stuffing with ham, the combination of sweet dried apricots and juicy pork sausagemeat in my Apricot & Sausagemeat Stuffing is a perfect match for Ham in Gingerbeer.

Warm ham is also delicious with boiled new potatoes, cauliflower and parsley sauce. Add a little of the cooking liquor to the parley sauce as it gives a lovely sweetness with just a hint of ginger.

Serve the ham cold with salad and baked potatoes. The flavour of the Ginger Beer comes through more strongly in the ham slices when it is cold.  It’s ideal to serve with pickles, relishes and chutney.

I make the ham joint stretch to three meals for three adults, with reasonably sized portions.  I think that is pretty good value all round.

Slow Cooker Ham for Cold Cuts is a recipe that is so very simple and yet really rather clever. A slow cooker is great for cooking a joint of ham but the meat is very tender and can fall apart. This is fine when you are serving the ham warm, but when you want slices of cold ham you really want them to hold together.

Slow Cooker Spiced Ham is the simplest of recipes.  All you need to do is add the citrus fruits and spices to the Slow Cooker with the liquid of your choice.  The juices and spices infuse into the ham during the long slow cooking, leaving the ham gently flavoured and wonderfully moist.

Leftover Turkey and Leek Pasta Bake is a great way to use the leftover turkey, chicken, or ham from a celebratory meal.

Leftover Ham Pate is a smooth processed spread made from leftover baked or boiled ham (gammon) combined with cottage cheese, a little honey, and some mustard.  It’s ideal to spread on bread, toast or crackers