Home » Soup » How to make Scotch Broth like a Scot 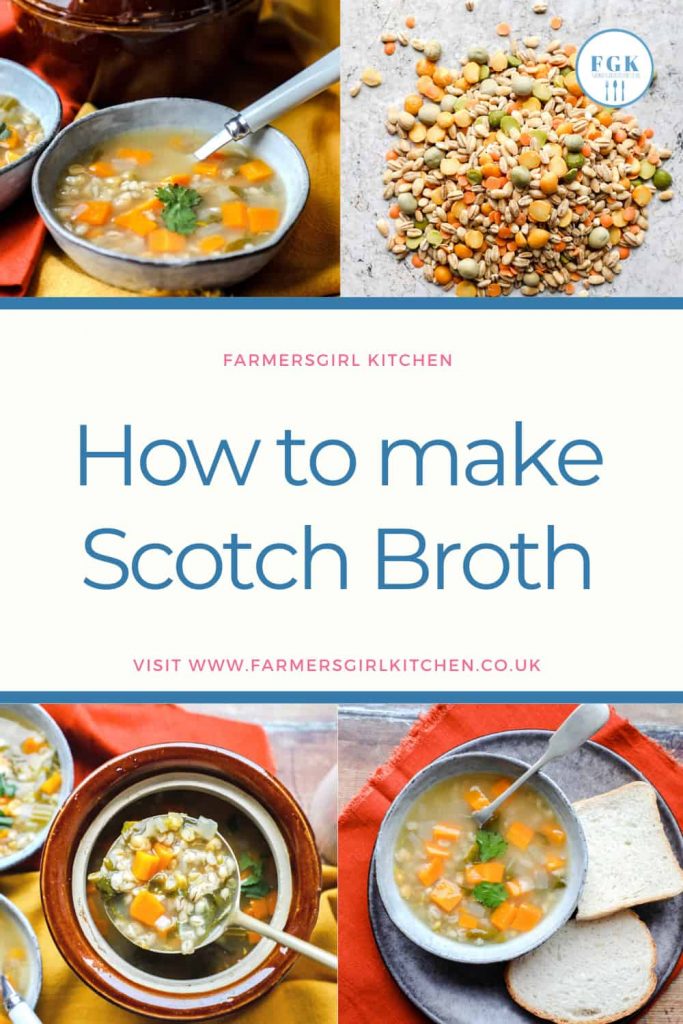 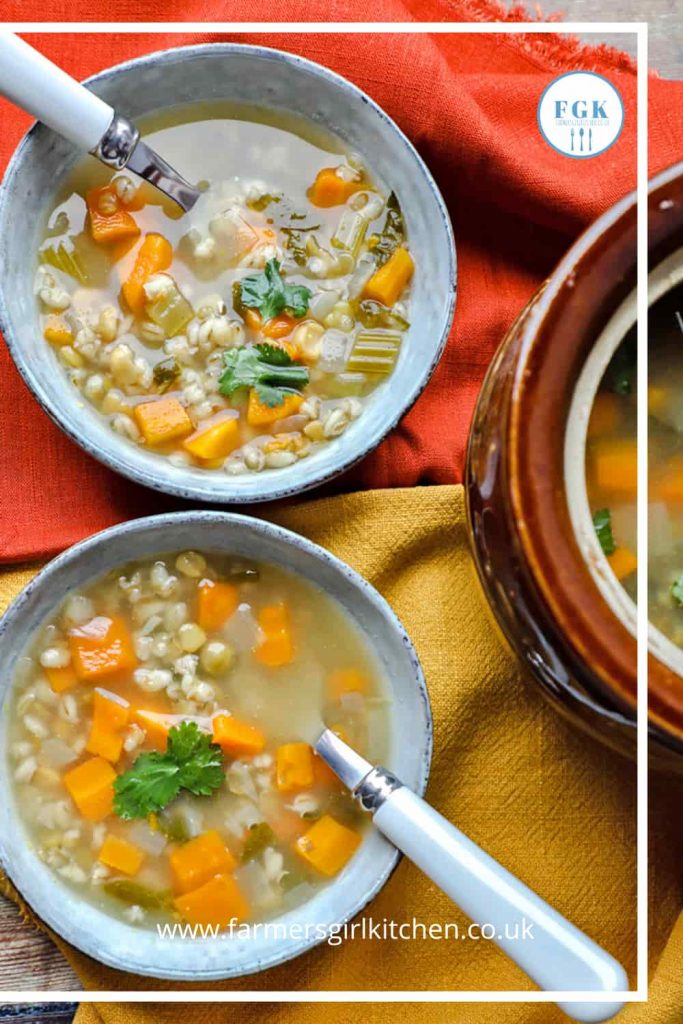 Scotch Broth is a hearty soup made with barley, dried peas and humble everyday vegetables. These simple ingredients combine with stock to make a warming broth that tastes delicious and fills you up.

Why should I make Scotch Broth?

I make Scotch Broth because it’s really delicious, warming and packed with vegetables. It’s also full of fibre from the pulses and vitamins from the vegetables.

Growing up in Scotland in the 1960s and early 70s, there were three types of soup served at every Scottish table: Scottish Red Lentil Soup Leek & Potato Soup and Scotch Broth. All of these soups are hearty, filling and inexpensive ways to feed your family.

I make soup nearly every week of the year and Scotch Broth is a real favourite with my family. If you make a big pot of soup, it will keep you going for lunches all week.

Is there are definitive recipe for Scotch Broth?

There are as many variations of Scotch Broth as there are cooks in Scotland! Traditional recipes evoke a lot of emotion and I have had many interesting discussions about the ‘right way’ to make Scotch Broth.

Traditionally, Scotch Broth is made with neck of mutton. The meat is cooked with vegetables, barley, and dried peas. The mutton is then removed and served with potatoes after the broth was eaten. However, if the soup is to be eaten as a meal, the mutton can be taken off the bone and added back into the soup.

Although I have made the traditional recipe, my usual Scotch Broth recipe contains no meat. It is a vegetarian broth and I make it with vegetable stock. I hope that you will enjoy it too.

What do I need to make Scotch Broth?

What is in broth mix?

The key ingredient in Scotch Broth is the Scotch Broth mix. You can buy broth mix in most supermarkets in the UK. The pack I use contains:

I can’t fine any broth mix, what else can I use?

Use a mixture of pearl barley, lentils and dried peas or beans. It is the barley and peas that form the bulk of the mix and you don’t have to be too precise with the proportions.

Do I have to soak the broth mix?

I would recommend soaking the broth mix overnight in lots of cold water although, if you forget, you can boil the the grains in some water for 20 minutes then leave to soak for two hours before starting your soup.

What kind of onions should I use in Scotch Broth?

Use white or yellow onions. Onions are essential to give the broth flavour. Use a large onion or if your onions are smaller use two.

Why should I use carrots in Scotch Broth?

Carrots add sweetness and provide the bulk of the vegetables in the soup. You don’t need to peel carrots for soup, just wash them. And top and tail, then quarter them lengthways and cut into dice.

Do I have to add celery to the soup?

I like to add celery to the soup as it adds a great flavour but if you don’t have any then you can still make Scotch Broth without it.

Kale is a type of hardy cabbage that will withstand the cold winter frosts. It is a very traditional ingredient for Scotch Broth add the kale at the end of cooking so it retains its bright green colour and all the nutrients.

I don’t have kale, what can I use instead?

If you don’t have any kale, then use savoy cabbage, spinach or parsley. They will add a lift of colour and provide a fresh taste and more nutrients. If you can’t get any green vegetables, you can serve the soup without them.

Can I use any other vegetables?

You can use other vegetables.  I recommend that you use onion and at least some carrots.  However, I often forage in my fridge for bits and pieces of vegetables to go into the soup.

Use the recipe as a guide and add in other vegetables such as:

What kind of stock should I use?

How much broth will the recipe make?

This recipe will make 8-10 hearty portions. If you want to make a smaller quantity you can half the ingredients and use a smaller pan.

Can I make Scotch Broth in my Instant Pot?

I make the broth in a pressure cooker, and it is an ideal recipe for the Instant Pot. I have included the time for pressure cooking in the recipe card. If you don’t have a pressure cooker or Instant Pot then you can make it in a large soup or stock pan. It will take slightly longer to cook but will taste the same.

How thick is the Scotch Broth?

This recipe makes a balanced broth with plenty of pulses, vegetables and liquid. Scotch Broth will thicken up a bit on the day after you make it as the starch from the pulses is released. It is simple to vary the thickness of your broth by adjusting the quantity of broth mix or by using more or less stock.

How long can I keep it?

Cool the soup and put it into a lidded container. Keep it in the fridge for up to 5 days. Bring the broth slowly up to boiling point when you reheat it. If it is very thick, be careful that it doesn’t stick to the bottom of the pan and burn.

Can I freeze Scotch Broth?

Yes, you can freeze this soup. I think it is worth making a large quantity, as you can keep some in the fridge or freeze it for another day. Let the soup cool then ladle it into freezer-proof boxes, label it and it will keep in perfect condition for up to 6 months.

As Scotch Broth is quite thick and dense, it is best to defrost it slowly overnight to retain the texture. You can defrost it in a microwave but it will still take a bit of time to fully thaw. Heat thoroughly before serving.

How do I serve Scotch Broth?

Easy Scottish Red Lentil Soup
An easy recipe for a classic comforting soup of red lentils, carrots, and onions.
Check out this recipe

To cook on the stove

To cook in a standard pressure cooker

To cook in Instant Pot or electric pressure cooker

Serve with wholemeal bread, bannocks or oatcakes. If you don’t have any kale, you can add spinach or other green leaves or chopped parsley. The soup can also be served without green vegetables. Any root vegetables can be added to this soup and any type of stock can be used.