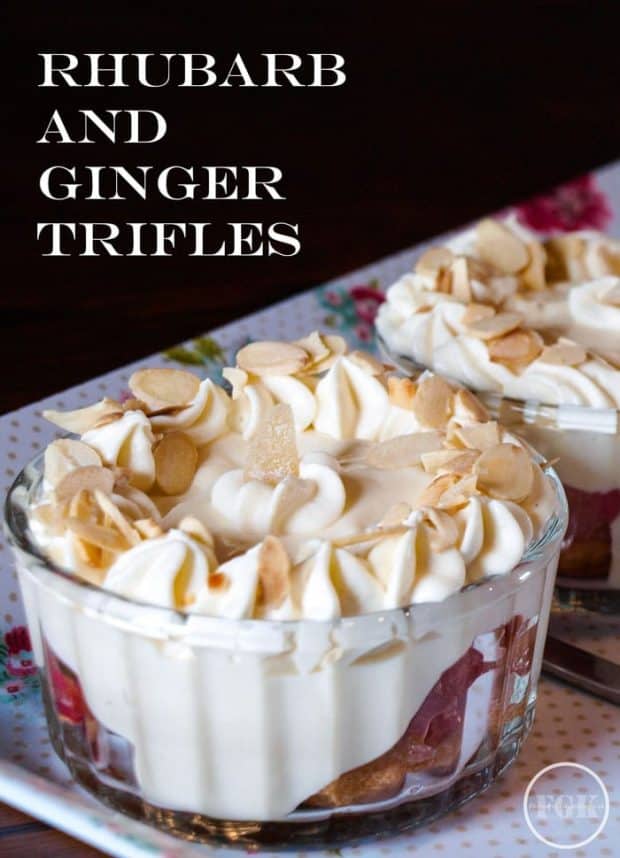 These Rhubarb and Ginger Trifles are a rhubarb recipe you can make with only two stalks of rhubarb and you can create a delicious creamy dessert that will feed four people.

It has a tart flavour and is too sharp to eat raw, but combined with sugar and other ingredients it has a delicious tangy taste.

Rhubarb is grown from a crown.  This is a thick rhizome that is planted just below the surface of the soil.

Rhubarb plants like lots of moisture and you need to mulch the plant to keep it from getting too dry.

The best rhubarb is available in Spring.  The earliest rhubarb you can buy is forced, this means it has been grown in the dark. Forced rhubarb has pale pink stems and is tender and sweet.

How to make Rhubarb and Ginger Trifles

This really is a very simple recipe that can be made even easier if you use ready-made cake and custard (pudding).  Then the only thing you need to do is roast the rhubarb and assemble.

Wash the rhubarb and cut it into 3 cm lengths.  Make all the rhubarb pieces about the same size because they will then cook evenly.

Lay the pieces of rhubarb in a single layer in an ovenproof dish and sprinkle with sugar and grated ginger and roast for about 15 minutes until the rhubarb is tender. Leave to cool.

I usually have a pack of trifle sponges or some sponge fingers in my pantry, they are ideal to pair with fruit because a trifle will stretch the most meagre of ingredients into a feast.

If you don’t have trifle sponges, then use Madeira cake or make a simple victoria sponge cake.   Another alternative would be to use gingerbread which will enhance the ginger flavour even further.

Cut or break up the cake into small pieces and put them in the base of four glasses or small dishes.  Pour on a little sherry, Madeira or orange juice to moisten the cake.

Custard is a very British dessert, sometimes called Creme Anglaise. It is made with milk or cream, sugar a little flour, and egg yolks. My recipe for Easy Vanilla Custard Sauce is perfect for this.

In the UK we also have an egg-free version made with ‘custard powder’ which is basically coloured cornflour that you mix with sugar and milk to make a sweet sauce.

In addition, there are many really excellent chilled custards available from UK supermarkets, choose the best one you can afford. In the US you can use ready-made vanilla pudding as a substitute.

Custard is usually served warm as an accompaniment to warm desserts. However, in this case the custard is cooled before being added to the trifle.

This Easy Rhubarb Tart recipe creates a really delicious dessert from simple ingredients. Make your own melt in the mouth shortcrust pastry or use ready-made all-butter pastry for an even quicker fix.  Fill the tart with a simple mixture of rhubarb, sugar, and cornflour and pop it in the oven.