Home » Scottish » How to host the Ultimate Burns Supper 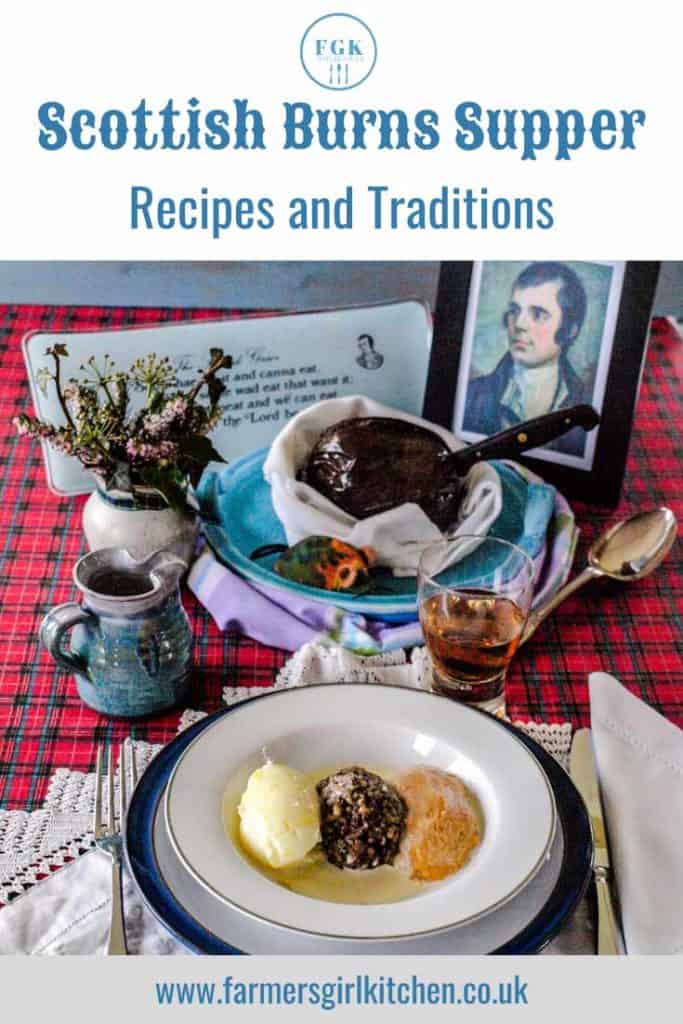 How to host the Ultimate Burns Supper is a  step by step guide to the recipes and traditions of a Burns Supper. Including a recipe for the classic Haggis, Neeps (Swede), and Tatties (potatoes).

What is Burns Night?

Burns Night is an evening to celebrate the poems and songs of Scotland’s National Bard, Robert Burns, on his birthday 25th January.

Who was Robert Burns?

Robert Burns was born on 25 January 1759 in the village of Alloway, in Ayrshire in the west of Scotland.

Burns worked on the family farm which was hard pysical work. He preferred poetry, nature, drink and women. At the age of 27 the success of his first published collection made him famous across the country.

In just 18 months, Burns had spent most of the wealth from his published poetry, and in 1789 he began work as an Excise Officer in Dumfries. Robert Burns died in 1796 aged 37 but he left behind a large body of poetry and songs.

What is a Burns Supper?

At a Burns Supper, you will hear speeches which are often humorous and can also be very rude!  There will also be recitations of Burns poems and renditions of some of his many songs.

A Burns Supper is also a feast of traditional Scottish food.  The Haggis is the star attraction with its own special poem.

I went to my first Burns Supper with my Dad when I was 17.  I’m not sure why he had a spare ticket, someone must have dropped out, but I was up for a new experience.

The actor Russell Hunter gave ‘The Immortal Memory’, the main speech to Robert Burns memory.  It was quite an experience and gave me a lifelong love of Scotch whisky!  I

have been to Burns Suppers since, but none of them impacted on me quite like the first.

For a traditional Burns Supper menus serve Cock-a-Leekie soup or Scotch Broth, This is followed by Haggis, Neeps (turnips/swede) and Tatties (mashed potatoes).

Dessert may be Cloutie Dumpling,  which is a boiled fruit pudding, or Tipsy Laird a type of sherry trifle.

I think Cloutie Dumpling after haggis would definitely sink you!  In my experience, the meal has concluded with oatcakes and cheese.

Raise a toast to Robert Burns with Scotch Whisky. Serve Sherry to those who do not enjoy Whisky.

I’m sure it’s no surprise that my Ultimate Burns Supper is mostly focused on the food.

For the entertainment, I’ve let my imagination run away with me and ‘invited’ the people I’d like to hear in my ultimate (fantasy) Burns Supper.

I’ve also created a menu that remains true to the roots of the Burns Supper and celebrates the incredible food of Scotland and the fabulous malt whisky of the Balblair Distillery.

The Balblair Distillery has a long pedigree, it was established 1790 and each Balblair Vintage captures the essence of its year in a bottle. They’re only ever selected at the absolute peak of perfection.

You’ll notice the bottles are not marked with an age statement, but simply with the year that the whisky was laid down.

From that date, every cask is sampled, judged and selected by John MacDonald to find its optimum maturation point. The point at which each Vintage says it’s ready.

Who will speak at The Ultimate Burns Supper?

At my Ultimate Burns Supper, I would invite the Reverend Richard Coles to start the proceedings, to recite the  Selkirk Grace.  Although he is not Scottish, I think Richard Coles would appreciate the sentiments Robert Burns and he would also be very entertaining company.

This is a prayer that, like most of Burns poetry,  speaks to people today as well as to those in the days when Burns wrote it:

The plate with the Selkirk Grace written on it was given to me by my maternal grandmother. It always reminds me of her.

Her other great saying was “Better belly burst than good food wasted”.  This is hardly surprising as she was a wife and mother through WW2  and brought up four children.

After the Selkirk Grace, it’s time to pipe in the Haggis and to declaim the famous poem that epitomises the Burns Supper: To a Haggis.

At my Ultimate Burns Supper, this poem would be read with gusto by actor,  Robert Carlyle, An accomplished actor, who would add an air of menace with the knife poised to cut open the haggis.

Here are a few verses, you can read the full version by clicking on the poem title.

The groaning trencher there ye fill,
Your hurdies like a distant hill,
Your pin wad help to mend a mill
In time o’need,
While thro’ your pores the dews distil
Like amber bead.

His knife see rustic Labour dight,
An’ cut you up wi’ ready sleight,
Trenching your gushing entrails bright,
Like ony ditch;
And then, O what a glorious sight,
Warm-reekin’, rich!

Once the ceremonial cutting open of the haggis is accomplished,  it is taken back to the kitchen to be served and the meal can begin.

Fish and Seafood is a great way to start a meal. Scottish seafood is some of the best in the world and there are lots of great recipes for elegant appetisers.

My menu begins with Pan-fried Scottish Scallops on a leek puree with crispy bacon and kale chips.

Scallops are shellfish, like clams oysters, and mussels. They grow on the seabed and filter up to 200 litres of seawater a day. Scallops have white meat and orange ‘coral’ or roe. The flesh has a sweet taste which is enhanced by pan-frying. The coral has a stronger flavour.

Both king scallops and queenies are fished locally in the Solway Firth, mainly being landed at Kirkcudbright.

Kale and Leeks are hardy plants and grow well in the colder climate of Scotland. Leeks have a mild onion flavour and are frequently used in soups and stews throughout the winter. Kale is a leafy green vegetable that is part of the cabbage family and features in my pan-fried scallop recipe and also in my Scotch Broth.

Traditional Ayrshire middle bacon is bacon which is rolled this means you get both the back and the streaky rashers rolled into one slice. Ayrshire is also the county where Robert Burns was born.

Cullen Skink is a traditional Scottish soup made with smoked fish, potatoes, and onions. It’s the perfect soup to serve as a hearty family meal with homemade soda bread or serve a small bowl to start your Burns Supper meal.

What to drink with your Appetiser

I would choose a light citrussy wine or sparkling wine to drink with these seafood dishes. On this occasion whisky would over-power the delicate seafood.

Haggis, Neeps and Tatties with a Whisky Sauce

Then the time comes to serve the haggis, with its traditional accompaniments of bashit neeps (mashed swede) and champit tatties (mashed potato)

Less traditional is the whisky cream sauce I am serving with the haggis neeps and tatties, but oh boy is it good!

What do you drink with Haggis?

Only a handful of American oak, ex-bourbon casks laid down in 2005 were selected by Distillery Manager John MacDonald to form this classic Balblair expression.

Sparkling gold in colour and full of character, this expression displays the classic Balblair  Aromas of green apple, ground spices and honey on the nose with hints of sweet toffee and a deliciously spicy long finish on the palate.

Furthermore, its notes of ground spice and oaky vanilla make it the perfect accompaniment to the traditional Burns Night supper of haggis, neeps and tatties.

For the Burns Supper dessert, I am serving a twist on the classic Scottish Cranachan. Cranachan is a traditional dish made with cream, honey, whisky and oats with Scottish Raspberries.

What is a Whisky Mac?

My dessert is inspired by a Scottish classic drink: the Whisky Mac.  A Whisky Mac combines Scotch whisky with Green Ginger Wine. It’s a delicious combination and a really warming drink.

My Scottish Cranachan Dessert with Ginger features chopped ginger in syrup and a ginger oat granola. I use redcurrants, rather than raspberries I add the redcurrants for a little acidity to balance out the richness of the cream. They also make a really pretty garnish.

What to drink with Scottish Cranachan Dessert

I use the Balblair 1990 Vintage in the recipe for the dessert.  It boasts the classic, fruity, floral and light heart of Balblair. This is set against a darker, richer backdrop of further maturation in Spanish oak.

After dessert I would serve tea and coffee with Scottish Shortbread Biscuits and Balblair 1990 Highland Single Malt Whisky, 1st release.

Next up in my Burns Supper programme would be Neil Oliver,  the popular  Scottish TV archaeologist, telling of the life of Robert Burns in the ‘Immortal Memory’ .

I would follow this with  Eddi Reader singing the songs of Burns including Ae Fond Kiss and Ye Jacobites.

The Toast to the Lassies

Fred McAuley has the right balance of wit and humour to provide an entertaining Toast to the Lassies.

Comedian, Susan Calman would be my choice to provide a robust reply to that toast.

Of course, every toast requires you to lift your glass and take a sip of Balblair Whisky, so make sure you have plenty to go round!

The evening would end with Eddi Reader leading the singing of Auld Lang Syne.

I hope you have enjoyed my virtual Ultimate Burns Supper and that you’ll try some haggis and raise a wee dram of Balblair whisky to toast Robert Burns on the 25th January.

For more information about hosting a Burns Supper and links to the poetry of Robert Burns, Visit Scotland have a comprehensive guide.

Haggis, Neeps and Tatties with a Whisky Sauce

For the whisky sauce

For the Neeps (swede)

For the whisky sauce

Don’t Miss My Latest RecipesCLICK TO SUBSCRIBE NOW to join my newsletter list & receive a FREE ‘How To Adapt Recipes For Your Slow Cooker’ printable!
Share by Email

This is a commissioned post in association with Balblair Malt Whisky, all opinions are my own.