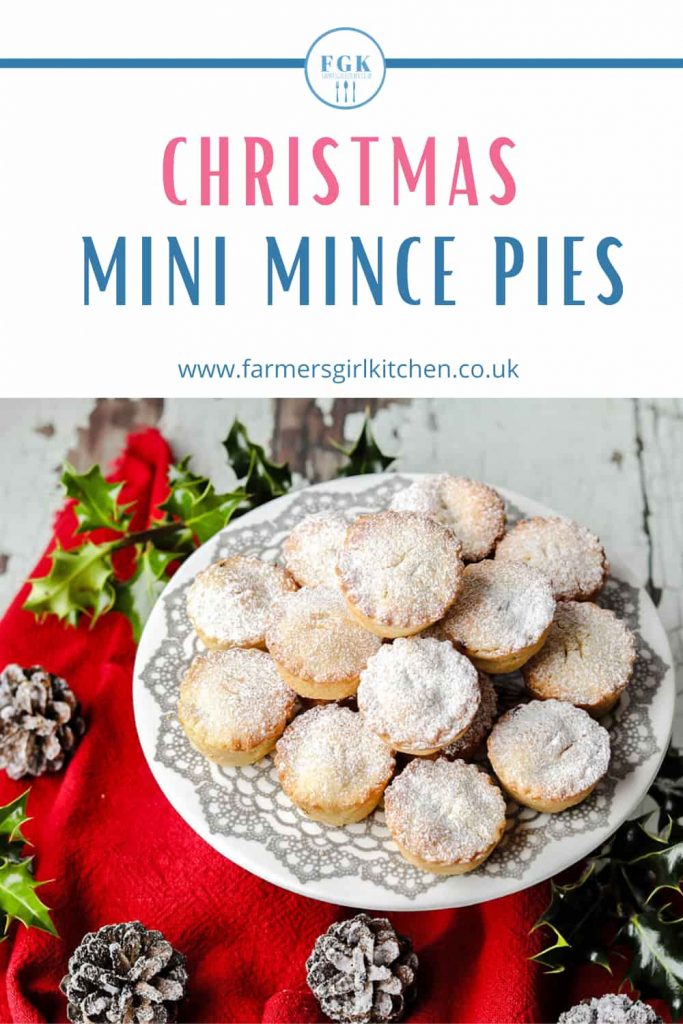 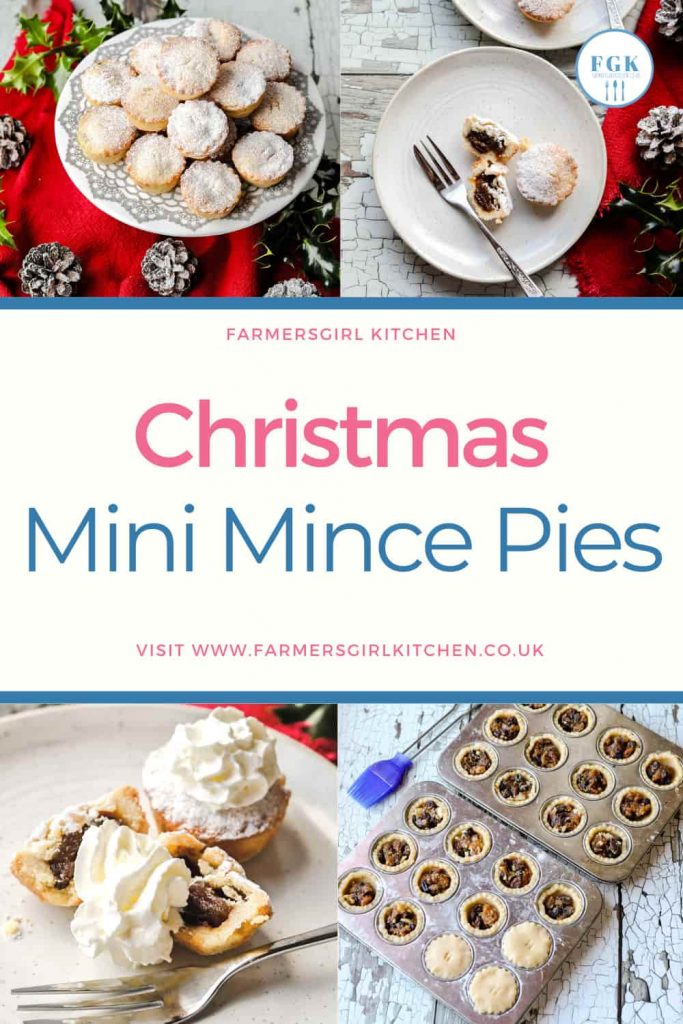 Christmas Mini Mince Pies are small buttery pastry pies filled with a delicious mixture of dried fruit, and warming spices. They are bite-sized versions of the traditional British mince pies that are such a feature of Christmas holiday feasts.

Warm mince pies are a very special treat and probably the first sign of Christmas is the big stack of boxes of mince pies in the supermarket.

What do I need to make Mini Mince Pies?

Mincemeat is a rich mixture of dried fruits, spices, apples, citrus zest and juice, alcohol, and suet or butter. Ready-made mincemeat is easily available in the UK, particularly in the run-up to Christmas.

Is there meat in mincemeat?

Mincemeat for mince pies does not now contain meat. The original mincemeat did have meat in it, as well as the dried fruit and spices that are now the main ingredients. And this is why it is called mincemeat.

The meat was gradually replaced with beef suet (fat). I use vegetable suet for this recipe for Christmas Mini Mince Pies. This makes the mince pies suitable for vegetarians. You can also use butter.

Can I make my own mincemeat for mince pies?

Yes, mincemeat is easy to make at home and tastes even better than mincemeat bought in jars and tubs from stores.

Why should I add ground almonds to the pastry mix?

I add ground almonds because this makes the pastry taste even more butter and makes it short and crumbly without falling apart.

When you are rolling out the pastry it is important to keep it cool as it becomes difficult to work if it gets too soft. If the pastry starts to get too soft, put it back in the fridge for 15 minutes then roll out again.

Can I use ready-made pastry?

If you don’t want to make your own pastry use ready-made shortcrust pastry. Preferably pastry that is made for sweet bakes but as long as it is shortcrust pastry it is suitable for this recipe.

Do I need any special baking equipment to make the Mini Mince Pies?

I use mini muffin tins to make the Mini Mince Pies. The muffin tins have a deep cup which means that, although they are small you still get lots of mincemeat filling.

What size are the Mini Mince Pies?

I make mini mince pies in a mini muffin tin, they are 50 mm in diameter. You can pop one of these mince pies into your mouth in one bite. In polite company, it is probably better to eat it in two bites!

How many Mini Mince Pies does the recipe make?

This recipe makes 24 mini mince pies. You can increase the recipe if you are making a large batch to give as gifts, or you can halve the quantities to make 12 mince pies.

How much mincemeat should I put in the mini pies?

Each mini mince pie is filled with a single teaspoon of mincemeat. Don’t be tempted to add more mincemeat, as it will bubble out of the sides of the pies. I like my mince pies to have a good balance of mincemeat and pastry and one teaspoonful is definitely enough.

Why do I need to put holes in the top of the mince pies?

Make two small holes in the top of each lid with the tip of a sharp knife. When the mincemeat cooks in the hot oven it creates steam. The holes let the steam come out and prevent the lid of the pie from rising up to release the steam.

Can I use the recipe to make full size Mince Pies?

Yes, you can make 12 full-sized mince pies with the recipe. Follow the instructions for the mini mince pies simply use larger cutters to cut out the pastry to fit a larger bun tin.

How long will the baked mince pies keep?

Store in an airtight container in a cool place for about 3-4 days. Refresh them in a warm oven for a few minutes if required. Don’t store the baked mince pies in the fridge as the pastry will go soft.

Can I freeze the Mini Mince Pies?

Yes. If you want to freeze the mini mince pies, then freeze them before baking.  Freeze them in the mini muffin tin, once frozen pop them into a box or bag.

When you want to bake them, put them back into the mini muffin tin and bake from frozen adding an extra 5 minutes to the baking time.

How do I serve Christmas Mini Mince Pies?

Serve mince pies warm for the maximum flavour. Eat them as they are or indulge and serve with some whipped cream or clotted cream. You can also serve two or three mini mince pies in a bowl with Easy Vanilla Custard Sauce as a substantial dessert.

Mini Treacle Tarts are pastry cases filled with breadcrumbs and sweet golden treacle, ground almonds, cream, and egg. They are so sweet and delicious, ideal for afternoon tea and make the perfect alternative to Christmas mince pies.

Easy Festive Apple and Mincemeat Streusel Muffins are easy to make with ingredients you probably already have in your larder. You can make them to serve for Christmas breakfast or as a sweet treat at any time of day.

Reindeer Cupcake from The Baking Explorer

For the Almond Pastry

For the Almond Pastry

If you don’t have a food processor you can rub the butter into the flour and ground almond mixture by hand.