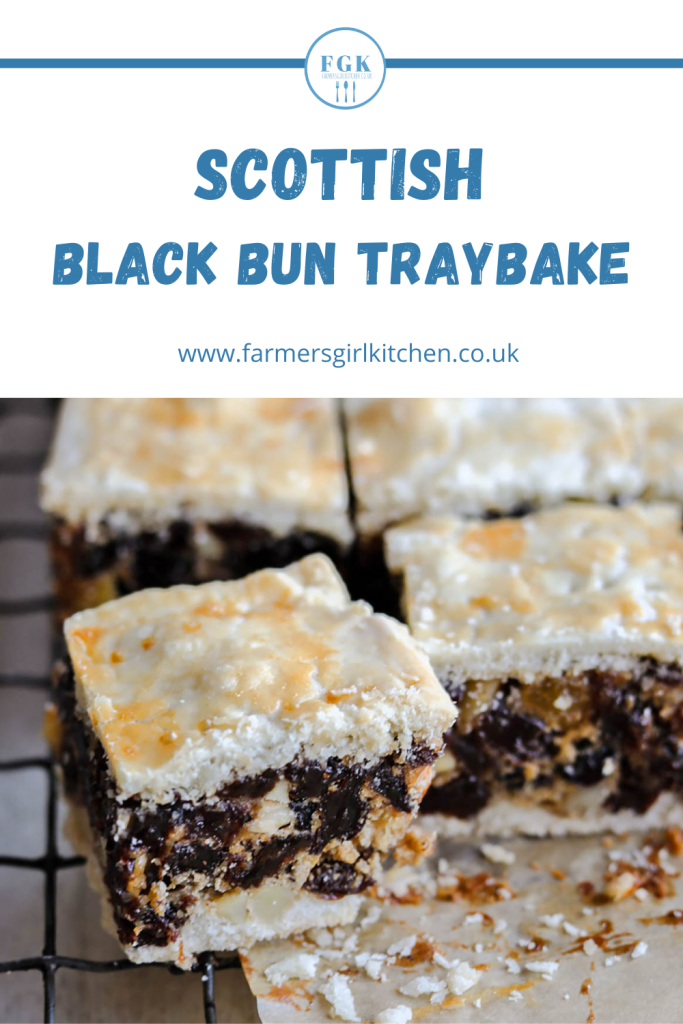 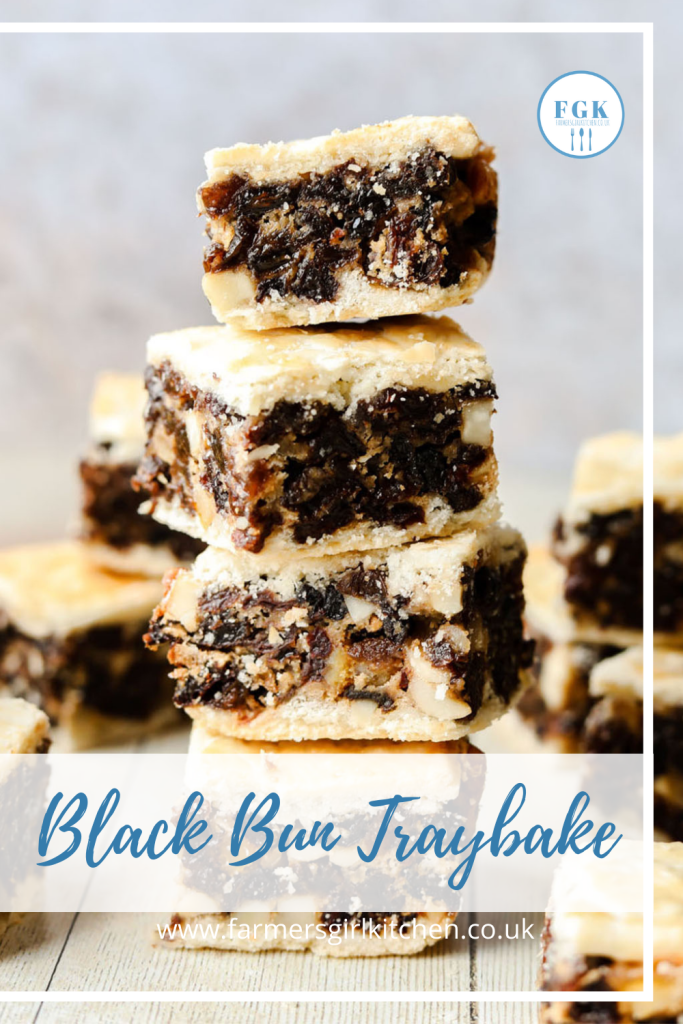 Black Bun Traybake is a rich and spicy fruit cake sandwiched between two layers of shortcrust pastry. It is a simple version of the traditional Scottish Hogmanay (New Year’s Eve) cake with all the same flavours. It is so simple to make and takes a third of the time to bake.

What is Black Bun?

Black Bun is also sometimes known as Scotch Bun. Today it is a dense rich fruit cake, a bit like Christmas cake, but covered in shortcrust pastry. Originally Black Bun was made with yeast dough, part of this dough was mixed with dried fruit and the rest was used to cover the cake.

This traditional cake is said to have come to Scotland when Mary Queen of Scots returned from France in 1561as a sort of King Cake served on Twelfth Night.

In 1560 the Scottish Reformation banned all Christmas and Twelfth Night celebrations other than religious services. The Scots simply moved their celebrations to the 31st December, and Black Bun is still served at Hogmanay (New Year’s Eve) gatherings.

Black Bun is a really easy cake to make, easier than Christmas cake. However, traditional Black Bun is baked in a cake tin or a loaf tin and takes 2-3 hours to bake. I make this traybake because I already have a large Christmas cake to serve over the holidays. It’s also great if you are short of time.

My Black Bun Traybake makes16 small squares and takes only 45 minutes to bake. It means I can continue the Scottish tradition and serve Black Bun at Hogmanay and I won’t still be eating it in February!

What ingredients do I need for Black Bun Traybake?

This is a very easy recipe to make, don’t be put off by the long list of ingredients. Gather all the ingredients together and set them out ready to begin. You will need:

Can I use ready-made shortcrust pastry?

You certainly can use a ready-made shortcrust pastry. Use a plain shortcrust pastry, not an all-butter pastry, and definitely not a sweetened pastry. The plain pastry for the Black bun is a contrast to the rich, sweet and spicy filling.

Currants are small, sweet dried grapes. They are not dried blackcurrants but a specific variety of raisins called Black Corinth. In the US they are known as Zante currants or Corinth raisins, outside the US they are generally known simply as currants. Currants are the oldest known raisins and their intensely sweet taste works really well in combination with other dried fruits like raisins and sultanas.

What is mixed peel?

Candied peel is the peel of citrus fruit, usually oranges and lemons. You cook the peel to soften it, then dip it in sugar syrup and leave it to dry. This process is repeated many times until the peel is saturated with sugar.

You can buy ready cut mixed peel or you can buy whole candied peel and chop it yourself, it does generally have a better flavour. If you do cut it yourself then make sure you cut the pieces very small.

What spices do I use in the Black Bun Traybake?

What kind of ginger should I use?

Use dried ground ginger powder. You only need a little but it adds to the spicy flavour of the cake. Make sure that your ginger powder is fresh as older powder loses flavour and may be disappointing.

Allspice is the dried unripe berry of Pimenta dioica, a tree native to the Greater Antilles, southern Mexico, and Central America. When the English first tasted allspice they thought it tasted like a combination of cinnamon, nutmeg and clove and so named it Allspice.

Why should I put black pepper in Black Bun?

Black pepper is a key spice in Black Bun and adds a unique flavour as well as warmth and piquancy to the cake. Pepper is an ancient spice that was once very valuable and luxurious. As such, it is a fitting spice to include in the original celebration cake for the feast of Twelfth Night.

What can I substitute for Brandy?

If you don’t have Brandy then you can use Scotch Whisky, dark rum or bourbon. If you don’t drink alcohol then I suggest you use strong black tea.

How do I store Black Bun Traybake?

Store the Black Bun Traybake in an airtight container wrapped in foil for up to two weeks. You can store traditional Black Bun for a longer time because the filling is completely encased in pastry. However, I don’t recommend storing this traybake longer than two weeks outside the freezer.

Can I freeze Black Bun Traybake?

Freeze the Black Bun Traybake in squares or fingers. Wrap tightly in foil and then store in a freezer-proof container or freezer bag for up to 6 months. Take out as many pieces as you need and let them defrost at room temperature.

Is it suitable for vegetarians?

Yes, this bake is suitable for vegetarians as it contains no meat products.

Can I make Black Bun gluten-free?

I have not tested this recipe using a gluten-free pastry or GF flour in the cake mix. The quantity of flour in the mix is minimal, make sure you check that the baking powder you use is also gluten-free.

Please note that this recipe may contain other allergens not referred to above and any variations suggested have not been tested unless otherwise stated.

How do I serve Black Bun Traybake?

I like to serve Black Bun Traybake on a large platter with Shortbread Biscuits (Cookies), Mini Mince Pies and slices of Christmas Cake. You can serve Black Bun in the traditional way, with a glass of Scotch Whisky, but it is also delicious with a cup of tea or coffee.

It’s traditional in Scotland to visit your neighbours just after midnight to wish them a Happy New Year. Every household wants to open the door to a tall, dark stranger who brings a bottle of whisky to toast the New Year, a piece of coal and some food Black Bun.

This is the ultimate in good luck, with the coal symbolising warmth in your home and the black bun indicating that you will have plenty of food. Black Bun makes an ideal hostess gift at New Year or any other time.

Mini Treacle Tarts are a little bite-sized version of traditional British dessert, a pastry case filled with breadcrumbs and sweet golden treacle, ground almonds, cream, and egg. They are so sweet and delicious, ideal for afternoon tea and make the perfect alternative to Christmas mince pies.

Chocolate Orange Scottish Shortbread is a festive twist on the classic Scottish shortbread I’ve been making for a very long time. Flavoured with orange zest and dipped in chocolate it’s a decadent treat.

Heavenly Meringues are like sweet little clouds filled with lightly whipped cream. As you bite into the meringue the crisp shell gives way to the billowy soft cream and just melts in your mouth.

I’m linking this recipe to #CookBlogShare this week hosted by Sew White.